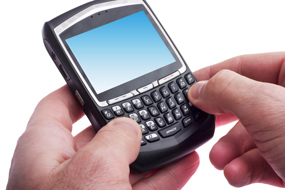 Image of BlackBerry from Shutterstock.

Once considered ahead of the curve, BlackBerry users are now developing something of a stodgy reputation.

The BlackBerry “has become a magnet for mockery and derision,” outranked in status by iPhones and new Android phones, the New York Times concludes. “BlackBerrys may still linger in Washington, Wall Street and the legal profession,” the story says, “but in Silicon Valley they are as rare as a necktie.”

At least one law firm is changing along with the times, the story says. Prodded by its associates, Covington & Burling recently gave its lawyers the option of using an iPhone. Even the White House, which favored the BlackBerry for security reasons, is supporting the iPhone.

Covington isn’t the only law firm backing new options for lawyers. Foley & Lardner reimburses lawyers up to a capped amount for technology devices of their choice, the ABA Journal reported in February. And a Paul Hastings IT official told the Journal the firm offers a “selection platform” that allows lawyers to carry a device other than a BlackBerry.