As challenges multiply to appointment of acting AG, Supreme Court is asked to weigh in 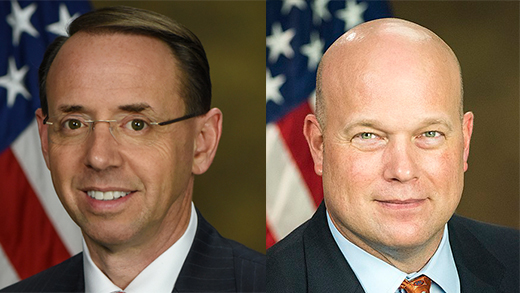 The U.S. Supreme Court has been asked to decide whether Deputy Attorney General Rod Rosenstein or Matthew Whitaker is the rightful acting attorney general.

The request was made on Friday via a motion in a pending Second Amendment case filed by SCOTUSblog founder Thomas Goldstein, report the National Law Journal, the New York Times and SCOTUSblog. The motion asks the Supreme Court to substitute Rosenstein for one of the prior defendants, then-Attorney General Jeff Sessions.

“We do want Rosenstein named the acting attorney general,” Goldstein told the National Law Journal. “But we say even if we’re wrong, it would be better for everybody to know the answer to this because this is turning into a mess.”

The case, originally captioned Michaels v. Sessions, is a constitutional challenge to the federal ban on gun possession by convicted felons.

Goldstein’s motion is not the only legal filing asking a court to decide on the correct acting attorney general. The state of Maryland, a Texas businessman and three Democratic senators also are seeking a court determination in three separate cases.

At issue is whether Whitaker’s appointment violates the Constitution’s appointments clause, which requires “principal officers” of the United States who report directly to the president be appointed with the advice and consent of the Senate. Another issue is whether the president must follow a federal law governing succession in the attorney general’s office, or whether he can choose to follow a different federal law governing vacancies.

Whitaker was formerly Sessions’ chief of staff. That job did not require Senate confirmation. Rosenstein went through the confirmation process for his deputy attorney general position.

The first reported legal action challenging Whitaker’s appointment was a motion filed by the state of Maryland on Nov. 13. It asked a federal judge in Maryland to substitute Rosenstein for Sessions in the state’s pending suit seeking to uphold key provisions of the Affordable Care Act. The case is Maryland v. United States. http://www.marylandattorneygeneral.gov/News%20Documents/ECF_6.pdf

On Nov. 13, Texas businessman Doug Haning filed a motion to dismiss the indictment against him on the ground that Whitaker was wrongly appointed, Politico reported on Nov. 15. Haning has been accused of distributing substandard pet food ingredients. The filings in the case listed Sessions’ name because of a recusal by the local federal prosecutor, Politico explained. The case is United States v. Haning.

Another legal challenge was filed on Monday when three Senate Democrats filed suit in federal court in Washington, D.C., report the Associated Press, the Washington Post and a press release from the organization Protect Democracy.

The lawsuit was filed by Sens. Richard Blumenthal of Connecticut, Sheldon Whitehouse of Rhode Island, and Mazie Hirono of Hawaii. The senators contend they have standing to sue because they were deprived of a vote on Whitaker’s appointment.

Had the senators had a chance to consider Whitaker, they could have reviewed his criticism of special counsel Robert Mueller’s investigation, the suit says. The senators also say they could have considered Whitaker’s suggestion that “the judiciary should not be ‘the final arbiter of constitutional issues.’ ”

The senators take issue with a memo by the Department of Justice’s Office of Legal Counsel that concluded Whitaker’s appointment followed the law and the Constitution. The memo had said the attorney general was a principal officer requiring Senate confirmation, but someone who temporarily performs the attorney general’s duties is not.

According to the suit, the memo does not “explain a key assumption underlying the memo’s analysis—that there exists an office of acting attorney general different from the office of attorney general, even though all its duties and responsibilities are the same.”

The senators are represented by Protect Democracy and the Constitutional Accountability Center.