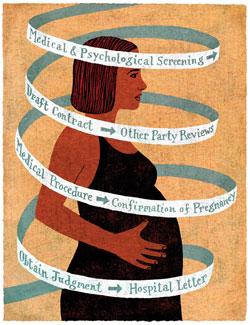 Like many couples, R.W.S. and B.C.F. wanted a child of their own. But the couple—in this case two gay men from Minneapolis—had ruled out adoption, which left surrogacy their only viable option.

So the two men did what so many others in their position have done: They turned to the Internet.

On the website of Surrogate Mothers Online, a volunteer-run support group for the surrogacy community, they came across a posting from a Minneapolis-area woman offering her services as a surrogate. Before long, the couple entered into a contract with the surrogate and paid her an undisclosed fee for her services. Through medical science, the woman soon became impregnated with a baby from R.W.S.’ sperm and her own egg.

Nine months later the surrogate gave birth—first, to a healthy baby girl, then to litigation.

At first, everything went smoothly between the new fathers and their surrogate. After the baby girl was born, the surrogate visited the newborn at the men’s home, and the nonbiological father proceeded with his plans to adopt the little girl, which was to have included a voluntary termination of the surrogate’s parental rights.

Then, seemingly out of the blue, about a month after giving birth to the girl, the surrogate—identified in court records only as E.A.G.— showed up unannounced at the couple’s front door with her father, young son and another surrogate in tow. She proceeded to tell the two men she had changed her mind about giving up the baby and wanted the girl back.

Sound familiar? Surrogacy first entered the collective public conscience almost 25 years ago when Mary Beth Whitehead reneged on her promise to give up all parental rights to Baby M, the daughter for whom she served as a surrogate for a New Jersey couple.

The Baby M case provoked such an outcry in some quarters over concerns about “baby selling” and the possible exploitation of poor women that a number of states enacted bans on surrogacy.

Such concerns have eased somewhat with the growing acceptance and popularity of in vitro fertilization and other types of assisted reproductive technologies that allow a surrogate to bear and give birth to a child she has no genetic or biological connection to, using embryos created in a lab with donated eggs and sperm.

Click to continue reading “And Baby Makes Litigation” from the March issue of the ABA Journal.