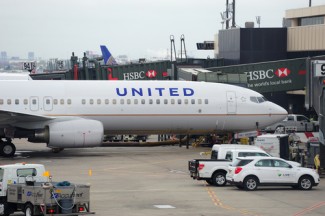 An aviation security officer who dragged a doctor from a United Airlines plane in an incident caught video that went viral has filed a lawsuit that claims he received inadequate training in how to handle such a situation.

The fired officer, James Long, claims the city of Chicago did not properly train him about the proper response to an “escalating situation.” United was negligent because it should have known that calling security officers would require the use of physical force, the suit says.

Long also alleged that Chicago Aviation Commissioner Ginger Evans defamed him in tweets that said airport security officers had acted inappropriately and the security staff is not armed “for good reasons.”

The Chicago Sun-Times, ABC 7 Chicago, the Chicago Tribune and Courthouse News Service have stories on the suit, filed Tuesday in Cook County circuit court. Defendants include the Chicago Department of Aviation, United Airlines and Evans.

Long was one of two security officers fired in connection with last April’s incident in which David Dao, a doctor from Louisville, Kentucky, was dragged from the flight after he refused to give up his seat. Dao, who broke his nose and suffered a concussion, reached a confidential settlement with United.

Long says he has not found a job since being fired last August. He says he used “minimal but necessary force” and Dao was injured because he lost his balance and fell after fighting with security officers.

Long’s suit alleges negligence, the infliction of emotional distress, breach of the covenant of good faith and fair dealing, defamation, and interference with prospective economic advantage. He is seeking punitive and compensatory damages that include back and front pay, and lost fringe benefits, including payments to his 401(k) retirement plan.

Spokespersons for United and the city of Chicago told ABC 7 Chicago that they had not been served with the suit and had no comment.

Long’s lawyer, Anne Beckert, told ABC 7 Chicago that Long was doing his duty and he was not in the wrong. “But if he did do something wrong it was because the city of Chicago failed to properly train him,” she said.