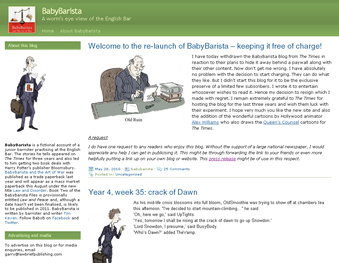 As a result of the plan for Times Online to move to subscription-only access in June, its popular legal humor blog, BabyBarista, which had been hosted by the site the spring of 2007, is jumping ship.

“I didn’t start this blog for it to be the exclusive preserve of a limited few subscribers,” BabyBarista author Tim Kevan wrote at his Barrister Blog. I wrote it to entertain whosoever wishes to read it.” Kevan is a barrister based in Braunton, England, who is also the founder of two legal businesses: CPD Webinars and Law Brief Publishing.

The blog (which appeared in our 2008 and 2009 Blawg 100) that started its fictional account of “BabyBarista” in 2006, when the title character was a pupil barrister; he has since become a junior barrister. In the blog’s new incarnation, BabyBarista and his co-workers—such as OldRuin, Busy Body and The Vamp—are sketched by illustrator Alex Williams.

A book based on the blog, BabyBarista and the Art of War, was published last August. This August, a mass-market edition of the same book, retitled Law and Disorder will be released. Kevan also says he is working on a second BabyBarista book, provisionally titled Law and Peace.