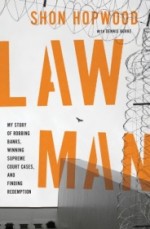 An unlikely success story, a convicted bank robber who wrote a winning certiorari petition to the U.S. Supreme Court while serving time and went on to a legal career is now the subject of a planned television show.

Shon Hopwood, who at last report was soon to earn a law degree at the University of Washington and headed toward a coveted clerkship at the U.S. Court of Appeals for the D.C. Circuit, co-authored a memoir in 2012 that is the inspiration for the planned show, according to the Hollywood Reporter.

NBC has ordered a script for the show from Carol Mendelsohn, known for her work producing CSI: Crime Scene Investigation. Hopwood will serve as a consultant for the production, which at least for now takes its title from his book, Law Man. The drama will focus on the protagonist’s work at the D.C. District Attorneys Investigative Unit, the article says; it isn’t clear whether his character will be an investigator or a lawyer there.