Bass, citing efforts for immigrants and women lawyers, says 'the ABA has never been more important' 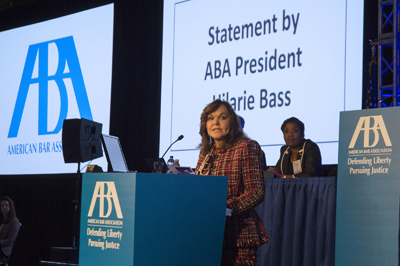 Outgoing ABA President Hilarie Bass told the House of Delegates on Monday morning that she’s proud of all the association has accomplished during her year as president.

But Bass put the main focus on the association’s active response to the separation of families at the nation’s southern border, which she saw personally in late June. She recalled her visit to the Port Isabel Detention Center in Texas, where mothers separated from their children were being held. Many had legitimate asylum claims, she said, but would happily have returned to the dangers they’d fled in order to get their children back.

“After listening to their heatbreaking stories, I gave them my personal commitment that the lawyers of America would not rest until every one of them was reunified with their children,” Bass said. “We are committed to enduring that every one of these separated children and every one of their parents who want to make an asylum claim in court will have the legal assistance they need.”

The ABA is doing that in multiple ways, she said. The ABA’s South Texas Pro Bono Asylum Representation Project (ProBAR) in Harlingen, Texas, has hosted training for pro bono lawyers every week, and numerous ABA entities have been working to recruit and train pro bono lawyers. The Fund for Justice and Education quickly set up a resource page and raised funds that are allow even more of this work. Just last week, the ABA began exploring a partnership with Lumos, a nonprofit set up by best-selling author J.K. Rowling, to provide social workers to families traumatized by federal policy.

Bass outlined other achievements from the past year that she believes association members should be proud of. One is the ABA’s work on homelessness, which includes a program connecting pro bono attorneys via Skype with homeless youths in shelters, as well as a toolkit and experts on call to answer questions. Another is a survey on the state of women in the law—from which some preliminary results have been released—which revealed that despite much progress, women still report discrimination and demeaning comments at work.

“There is still a surprisingly long distance to go before we can say that the average hardworking female attorney can look forward to the same satisfaction and career trajectory as a hardworking male attorney,” Bass said. “I cannot wait for that change and the chance to tell my younger attorneys that their day has finally arrived.”

Another initiative Bass highlighted was the work of the Working Group to Advance Well-Being in the Legal Profession, which conducted a survey that returned disturbing results. Compared to other professions, Bass said, attorneys have high rates of substance abuse, depression and anxiety, and they’re often reluctant to seek help for fear that it will hurt their professional standing. The Working Group has withdrawn its accompanying policy proposal, Resolution 103, to give other ABA entities more time to weigh in, but Bass called on the association to “recognize that the status quo is not an alternative.”

And she gave special praise to the Disaster Legal Services Program of the Young Lawyers Division, which she noted has been on the ground within days of major disasters, in cooperation with the Federal Emergency Management Agency. When Bass and incoming president Robert Carlson of Montana visited Puerto Rico, she said, they were constantly thanked for that help. She had a similar experience when visiting Warsaw, Poland, not long after the ABA publicly supported that country’s judiciary against attacks on its independence.

“The ABA has never been more important in the U.S. and throughout the world,” she said. “It has been the greatest privilege of my life to have the honor of serving you as president.”