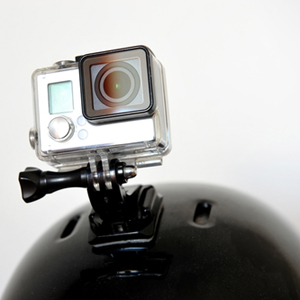 Admittedly, flipping the bird—more than once—at the driver of the blue pickup that repeatedly passed close to him on a Georgia roadway one Saturday last month was not the best idea, bicyclist Alan Crocker now says.

But his road-rage story has a somewhat happy ending because of the helmet cam Crocker was wearing: After a Floyd County police officer saw the video, he charged the driver with assault and battery, CNN reports.

The video shows a jumble of images that support Crocker’s claim that the other man pushed him off his bicycle. And it helped refute the driver’s claim that Crocker had provoked the alleged attack by kicking his vehicle, according to a police report.

Crocker also uploaded his video to Close Call Database, one of a number of online efforts to keep the roads safe for bicyclists by holding aggressive drivers accountable, CNN reports.

“I was able to show the officer the video right there on the side of road,” he said. “It’s not every day that there’s clear evidence showing a cyclist was mistreated.”