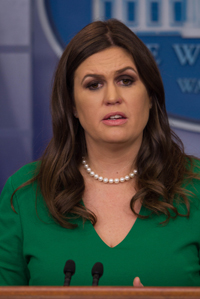 Sullivan & Cromwell partner Francis Aquila’s overuse of emoticons is not the reason his Thursday tweet about Sarah Huckabee Sanders got so much attention.

Sanders tweeted that Graham “has more decency and courage than every Democrat member of the committee combined. God bless him.”

Aquila responded with a string of weeping emoticons and wrote: “I never knew you had a sense of humor OMG!!!! How funny !!!! Rot in Hell You B!tch.”

Aquila deleted his entire Twitter account late Thursday, according to the New York Law Journal. The publication later obtained an email apology from Aquila to his firm colleagues on Friday.

The email read: “Last evening, I responded to a tweet from Sarah Sanders in an inappropriate and hurtful manner. Clearly my emotions got the best of me, but equally clearly neither Ms. Sanders nor any woman should be subjected to such animus. I take full responsibility for my ‎actions and I sincerely apologize to Ms. Sanders.”

Aquila did not immediately respond to a request for comment by the ABA Journal. The New York Law Journal article reports that Aquila has contributed to Democrats, while several other Sullivan & Cromwell partners have roles in the Trump administration.

In 2009, the ABA Journal named Aquila one of its Legal Rebels, for his innovative use of social media in his practice. “I’m a very social person,” Aquila told the ABA Journal in 2009. “It’s just another extension of my personality.”