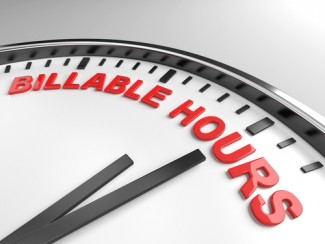 Most law firms say they use the billable hour model for pricing most of their work, but the reality is different, according to a new report.

Largely because of budgets and caps imposed by clients, 80 to 90 percent of law firm work is done outside of the traditional billable hour model, according to the 2017 Report on the State of the Legal Market. The report (PDF) was released by Georgetown Law’s Center for the Study of the Legal Profession and Thomson Reuters Legal Executive Institute, according to this press release.

“One of the most potentially significant, though rarely acknowledged, changes of the past decade has been the effective death of the traditional billable hour pricing model in most law firms,” the report says. “Plainly, the imposition of budget discipline on law firm matters forces firms to a very different pricing model than the traditional approach of simply recording time and passing the associated ‘costs’ through to the client on a billable-hour basis.”

The capped-fee model forces firms to “earn their way up” to the fixed price through recorded billable hours that may already be deeply discounted, which is in some ways worse for law firms than using alternative fees, according to the report.

The demise of the billable hour was largely overlooked because of a definitional problem, the report says. Pricing models that used billable hours were considered business as usual, and different from alternative fee arrangements based on fixed-price or cost-plus models.

Capped billing is one of several challenges faced by law firms since the recession. The report notes stagnation in demand growth for law firm services, a decline in productivity for most categories of lawyers, growing pressure on rates, and declining profit margins. Clients, meanwhile, are demanding greater efficiency, outsourcing some work to legal service providers, and reducing use of newbie associates.

Law firms have dealt with the challenges through “easy fixes,” the report says. They included laying off associates and staffers, de-equitizing some partners, reducing hiring, using more contract lawyers and moving operations to service centers in lower cost locations.

Those changes have helped, but they will not be as effective in the future, the report says. The report recommends:

–Reducing reliance on billable hours in determining associate bonuses and partner performance. The focus should be on profitability, not hours, according to the report.

–Reimagining the model for delivery of legal services to include not only lawyers but also paraprofessionals, technologists, information specialists and process managers.

–Considering a new role as supply chain manager that would coordinate all services provided to the client, including those provided by outsourcers and other vendors.

–Focusing on core practices and delivering the highest value to clients in those areas. “In a market where firms face mounting pressures from both traditional and nontraditional competitors, strategic focus and differentiation are critical to survival,” the report says.