Bills in at least 16 states seek to make protests more orderly: Are they constitutional? 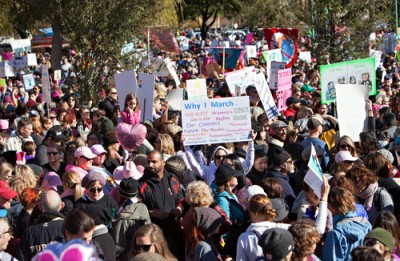 Fed up with disorderly and sometimes violent protests, Republican lawmakers in several states have introduced bills to help police keep protesters under control.

The new laws in North Dakota make it a misdemeanor to wear a mask or hood while committing a crime, increase the penalties for rioting, allow officers to issue citations rather than make a criminal arrests for trespassing, and expand authority to bring in police from outside the state.

Bills in other states take a variety of tacks. A bill in Tennessee would shield motorists from liability if they accidentally hit anyone who deliberately blocks a street. A bill in Iowa punishes blocking a highway with a maximum sentence of five years in prison and a $7,500 fine; a similar bill in Mississippi provides for a $10,000 fine. A Minnesota bill would allow lawsuits against protesters to recover the cost of the police response.

An Arizona bill would have expanded state racketeering laws to include rioting, making protest organizers liable for damages if a protest turned violent. The bill has been killed, Phoenix New Times reports.

Lee Rowland, a senior attorney with the American Civil Liberties Union, is among the critics who are raising constitutional concerns. “The Supreme Court has gone out of its way on multiple occasions to point out that streets, sidewalks and public parks are places where [First Amendment] protections are at their most robust,” Rowland told the Washington Post.

Rowland said there are no gaps in the laws that are being address by the legislation. Rather, the bills are intended to increase penalties to the extent that protesters engage in self-censorship, Rowland said.