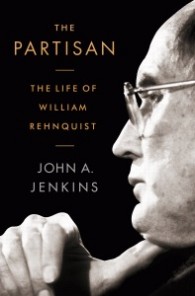 The author of a new biography of William H. Rehnquist doesn’t hold back in his evaluation of the late U.S. Supreme Court chief justice.

Indeed, while the Wall Street Journal Law Blog gives John A. Jenkins credit for being direct, it notes that Jenkins “doesn’t think very highly of his subject.”

In a review of the forthcoming biography, the Law Blog notes that Jenkins writes, “Rehnquist’s judicial philosophy was nihilistic at its core, disrespectful of precedent, and dismissive of … institutions that did not comport with his black-and-white view of the world.”

Jenkins, a veteran journalist and president and publisher of CQ Press, goes on to say in “The Partisan: The Life of William Rehnquist,” that the justice was “infatuated with his own genius” and held racist views.

Despite the criticism and the prediction that the book won’t be welcomed by Rehnquist fans, the Law Blog says the work isn’t a “quick hit job,” noting that Jenkins and researchers “pored through Rehnquist archives and the papers of other justices to illuminate some little-known corners of Chief Justice Rehnquist’s life.”

Rehnquist was appointed to the bench in 1971 and served as chief justice from 1986 until his death in 2005.

And in the end, Jenkins tells the Law Blog, “I really respect Rehnquist for his tremendous intellect.”

Read an excerpt from the book here.