Blogging federal judge says it's time for SCOTUS to 'stfu' 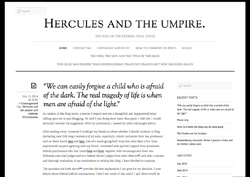 Now Kopf has a message for the U.S. Supreme Court in a blog post criticizing the court for accepting the Hobby Lobby case and issuing a decision that opens the justices to accusations of partisanship. Writing at Hercules and the Umpire, he suggests the court should avoid hot-button cases next term.

“As the kids say, it is time for the court to stfu,” Kopf wrote, supplying a link to the Urban Dictionary meaning of “stfu.”

He notes that the majority in the Hobby Lobby case was made up of five male justices appointed by Republican presidents. The decision struck down the health law’s contraceptive mandate for closely held companies when their owners have religious objections.

“To most people,” Kopf wrote, “the decision looks stupid ’cause corporations are not persons, all the legal mumbo jumbo notwithstanding. The decision looks misogynistic because the majority were all men. It looks partisan because all were appointed by a Republican. The decision looks religiously motivated because each member of the majority belongs to the Catholic Church, and that religious organization is opposed to contraception. While ‘looks’ don’t matter to the logic of the law (and I am not saying the justices are actually motivated by such things), all of us know from experience that appearances matter to the public’s acceptance of the law.”

Now Kopf has published a note from a Nebraska lawyer urging Kopf to end the blog. Kopf did stop blogging after an uproar caused by his “go to hell” advice for Congress, but he resurrected the blog after he was diagnosed with Hodgkin’s lymphoma. After that, he made waves with his fashion advice for women lawyers who, in his opinion as a “dirty old man,” dress provocatively.

The letter from the North Carolina lawyer stressed that public trust in the judiciary is essential to the justice system. The judge’s controversial blog posts harm that trust, the lawyer wrote.

“There is little surprise in the level of attention drawn by, or the inevitable public reaction to, a federal trial judge, in a public forum, repeatedly using vulgarity including serial exercise of the f-word, apparently disclosing a fondness for looking up the skirts and down the blouses of female attorneys who appear before him, telling Congress to ‘go to hell,’ and urging the SCOTUS to ‘stfu,’” the lawyer writes. “It is not that a judge, any more or less than anyone else, does or does not have thoughts like the more controversial ones you write about in your blog; it is that a judge should display the thoughtfulness and restraint appropriately expected of people who have accepted society’s call to judiciously make important, vital decisions.”

In a column posted Friday morning, Kopf said that after giving serious thought to the lawyer’s “thoughtful and impassioned letter,” and asking openly for advice, he has decided to continue his blog.

“I care deeply about federal judicial transparency, I don’t see much of that and if I quit there would be even less of it and none of it from federal district judges. The implicit assumption of the thoughtful lawyer who wrote me is that mystery and mythology are better for the legal profession and the judiciary than transparency, particularly when the transparency revealed is raw. I profoundly disagree,” Kopf wrote.

“On the contrary, that thinking has brought both the legal profession and the judiciary to the brink of disaster. In these polarized times, why should anyone trust us if we judges, particularly federal judges, are not utterly open to examining our motivations and mistakes before the public for whom we serve? Law is not politics, but that assertion now requires proof, not mere belief.”

Hat tip to the Verge and Business Insider.

Updated on July 11 to add quotes from Judge Kopf’s most recent column.