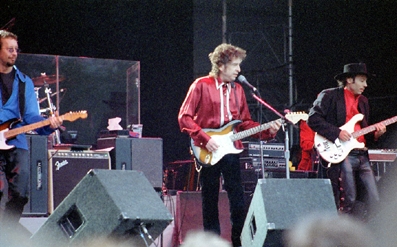 Bob Dylan at the Lida Festival in Stockholm in 1996. Photo from Wikimedia Commons.

I hate being on the road too early in the morning; sometimes it’s just you and a long stretch of highway until the sun rises. I’ve found the best way to alleviate the loneliness is two-fold. Every once in a while, silence is golden. The lack of distractions can present the perfect opportunity to clear your head or work through things you haven’t had the time to sort out yet. In other instances, it’s the music that occupies the space.

I drove to court in another county recently with my Bluetooth music set to shuffle. My song library is fairly extensive, so I never know what the next track might turn up. During the trip, a great Bob Dylan track started up. I hadn’t heard the 1975 protest song “Hurricane” in some time, and the lyrics got me thinking in a way they never had previously.

For those who don’t know, “Hurricane” tells the story of Rubin “Hurricane” Carter who, while contending for the middleweight boxing championship, was arrested, charged with and convicted of three murders. In fact, he was twice convicted for those murders (which all arose out of the same occurrence).

Many aren’t aware of Carter’s troubled life prior to his career as a professional boxer. He spent time in a juvenile reformatory for attacking a man with a knife before Carter had even reached his teens. After running away from the reformatory, he joined the United States Army. He boxed in the armed services until he was discharged as a result of multiple courts-martial. After the Army, Carter did an additional stretch of incarceration.

He became a professional boxer after his release from prison. Throughout his professional career, he accumulated an impressive record which, by 1965, had him seated as one for the top five contenders for the middleweight crown. His title hopes came to an end though once he was arrested as the killer in the triple homicide in question.

His first conviction for the crimes occurred in 1967. Though represented by a prominent defense attorney at the time, Carter was still found guilty of the three murders and subsequently given three life sentences. He was convicted alongside his friend John Artis. The thrust of the prosecution’s evidence relied on the eyewitness testimony of two men—Alfred Bello and Arthur Bradley—who fingered Carter as one of the men carrying weapons at the scene of the crime.

The second conviction occurred in 1976 after the original “eyewitnesses” recanted their previous testimony in 1974. Carter and Artis were both granted new trials based on the prosecution’s failure to disclose evidence regarding the reliability of its two principal witnesses.

By this time, public awareness regarding Carter’s conviction was at an all-time high, as he had become somewhat of a cause célèbre across the United States. Muhammad Ali stood with Joe Frazier in protest outside the prison where Carter was held. Joan Baez and Joni Mitchell threw in their support. To further the cause, Dylan co-wrote “Hurricane” with Jacques Levy, allegedly playing it at every stop on his Rolling Thunder Revue tour and at the “Night of the Hurricane” benefit concert in Carter’s honor. 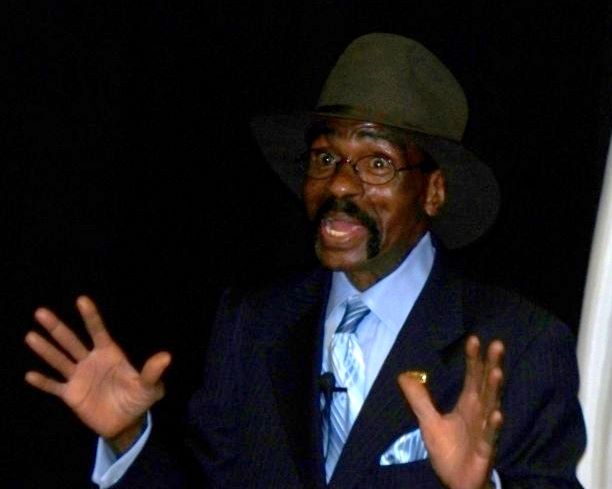 Former middleweight boxer Rubin “Hurricane” Carter was falsely convicted of murder. He spoke about his experience at Bunker Hill Community College in Boston in March 2011. Photo from Wikimedia Commons.

“Hurricane” was released in November 1975 on Dylan’s Desire album. The tune clocks in at a very radio-unfriendly time of 8:33. That’s to be expected, though, when your song contains more than 800 lyrics. The tune tells the tale of the incident that led to Carter’s arrest along with the alleged errors and missteps that resulted in his conviction.

Arguably, the song is based on the account that Dylan took from the 1974 autobiography that Carter wrote while still incarcerated. Through his book—The Sixteenth Round: From Number 1 Contender to Number 45472—Carter explained the pain and suffering that he experienced as the victim of a racially unjust system. Dylan visited Carter in prison after reading the book, and shortly thereafter, Dylan and Levy pinned the tune.

The song is an exceptional exercise in storytelling. In his unique way, Dylan weaves a tale of a man framed for a murder that he did not commit. The song begins with an account of the killing and the “witnesses” to it. Throughout the track, Dylan explains the alleged turn of events that resulted in Bello and Bradley testifying against Carter to secure the convictions for the prosecution.

Regardless, it’s also arguable that Dylan didn’t get all the facts correct. In my research for this column, I didn’t come across any mention of the investigative journalism that Dylan conducted for the song. It’s probably fair to assume the “facts” he incorporated in “Hurricane” were taken from Carter’s autobiography and Dylan’s visit with him in jail. To say those sources might be biased is putting it lightly.

Still, Dylan’s tune brought Carter’s story to the national spotlight. While the support of other prominent people and public figures was no doubt beneficial, no one had the reach that Dylan commanded at the time. “Hurricane” was a huge hit, reaching No. 33 on the Billboard Hot 100 and becoming Dylan’s fourth most successful single of the 1970s. It likely helped gain Carter a second trial, even though he was convicted yet again.

Carter was ultimately released in 1985 through a writ of habeas corpus to the U.S. District Court for the District of New Jersey based on Brady violations. Prosecutors appealed the decision to the 3rd U.S. Circuit Court of Appeals at Philadelphia, but the 3rd Circuit upheld the lower court’s ruling. Prosecutors also failed in their attempts to petition the U.S. Supreme Court.

Despite the “true crime” nature of the song’s narrative, along with the procedural relief that was ultimately granted, it’s easy to forget that Carter was never found innocent. Prosecutors simply declined to try Carter a third time. One commentator noted that Carter’s case was a “ ’wrongful’ conviction of procedure, not of evidence.”

Nevertheless, the impact of “Hurricane” lives on. If you’re not one for music, no worries. Carter’s story also made its way to the silver screen, with Denzel Washington taking up the titular role of Carter in The Hurricane in 1999.

Other songs written about crimes

While Dylan’s “Hurricane” is far from the only song written about a crime or a criminal, it might share the most in common with today’s “true crime” genre of entertainment. Most other arrangements written about criminals and the crimes that they committed fail to delve into the minutiae of the facts. Most don’t spend much energy, if any, arguing that some miscarriage of justice occurred. Consequently, most songs about criminals and crime fail to purposefully prompt a subsequent look at their subject matter.

Many songs written on the topic seem to focus either on exploiting the notoriety of the criminal or discussing the lyricists’ disgust or distaste with the individual and their actions. The crime or the criminal may only act as a talking point, and the track may amount to nothing more than a “name-drop” or veiled reference.

However, “Hurricane” may be the most famous song questioning a man’s criminal conviction. Dylan took a page from the “true crime” genre by imploring audiences to view the totality of the circumstances surrounding the conviction while also advocating for the justice system to right its wrongs.

Are you aware of any other “true crime” tunes? Share your thoughts by emailing ABA Journal Conversation.