Linklaters got some free publicity when the wife of soccer player Wayne Rooney sported an umbrella with the logo of the British-based law firm at a Manchester United home match.

The Daily Mirror ran photos of Coleen Rooney to show her “baby bump” at the match in Old Trafford. But the publicity was a boost for a Linklaters effort in which it promotes itself to would-be lawyers, the Lawyer reports. The firm stocks umbrellas to be borrowed by students on rainy days in bins at 10 university campuses.

“Corridors at Linklaters were buzzing with excitement” about the photos, the story says.

Linklaters pays “brand ambassador” students to promote the firm on campus, and one of those people apparently played a role. According to a firm statement, “We’ve been running a ‘borrow a brolly’ campaign in universities across the UK. It seems one valiant Manchester University brand ambassador seized the opportunity to take their role to a whole new level and promoted our graduate recruitment opportunities to Old Trafford and the world.” 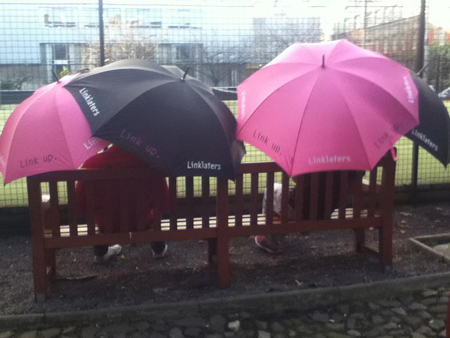 Previous:
Lawyer extradited from Nicaragua is accused of role in $137M fraud scheme

Next:
OJ Simpson: I gave $500K to lead lawyer for costs; he was supposed to defend me for free