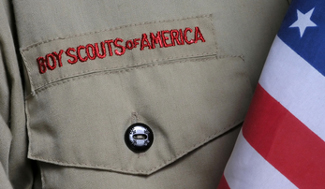 The executive board of the Boy Scouts of America voted Monday, 45-12, to eliminate a national ban on gay troop leaders, effective immediately.

The vote comes two years after the 2.5 million member group decided to allow openly gay scouts. It follows comments in May by the BSA’s president, former CIA director and Defense Secretary Robert Gates, that the “status quo in our movement’s membership standards cannot be sustained” and could result in “staggering” litigation costs if not lifted.

At the same time that the board voted to remove the national ban on gay troop leaders, however, it also agreed to a religion-based exception for local troops that will allow them to bar gay troop leaders and gay employees.

“This change allows Scouting’s members and parents to select local units, chartered to organizations with similar beliefs, that best meet the needs of their families,” said the BSA in a written statement. “This change also respects the right of religious chartered organizations to choose adult volunteer leaders whose beliefs are consistent with their own.”

ABAJournal.com: “California judges will be banned from Boy Scouts as a result of vote by state supreme court”