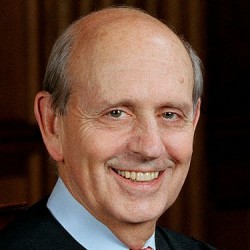 Returning to a subject he addressed last year, Justice Stephen G. Breyer on Monday complained that death sentences are arbitrary and said that their constitutionality should be examined.

Breyer called for a constitutional review of the death penalty in a dissent to a cert denial (PDF) in a Florida case. Breyer said he would have granted U.S. Supreme Court review in that case—in which the prisoner has been on death row for 40 years—and two other capital cases denied review, report the Washington Post and the New York Times. Breyer said that the executions in the cases denied review were “taking place in what I would consider especially cruel and unusual circumstances.”

Breyer had called for review of the constitutionality of the death penalty in a dissent last year that was joined by Justice Ruth Bader Ginsburg. Ginsburg did not joint Breyer’s dissent Monday.

“As I and other justices have previously pointed out,” Breyer wrote on Monday, “individuals who are executed are not the ‘worst of the worst,’ but, rather, are individuals chosen at random, on the basis, perhaps of geography, perhaps of the views of individual prosecutors, or still worse on the basis of race.”

Breyer dissented from the decision to deny review in the case of Henry Perry Sireci, who was first sentenced to death in 1976. Forty years is more than the average life span when America banned cruel and unusual punishment, Breyer said. When Sireci was first sentenced to death, Breyer said, “the Berlin Wall stood firmly in place. Saigon had just fallen. Few Americans knew of the personal computer or the internet. And over half of all Americans now alive had not yet been born.”

Breyer said he would have also have heard the case of Romell Broom, who survived the first attempt to execute him in 2009. “Medical team members tried for over two hours to find a useable vein, repeatedly injecting him with needles and striking bone in the process, all causing ‘a great deal of pain,’ ” Breyer wrote. “Given its first failure, does its second attempt amount to a ‘cruel and unusual’ punishment?” The U.S. Supreme Court denied cert in that case Monday.

Breyer also indicated he would have granted cert in the case of Ronald Smith, who was sentenced to death even though jurors recommended life in prison. The judge overrode jurors and imposed the death penalty under an Alabama law that gives judges the power to do so. The U.S. Supreme Court denied a stay of execution last Thursday. A newspaper account of the execution that followed said Smith “heaved and coughed” for the first 13 minutes of the execution.

New York Times: “The Lethal Gaps in How the Supreme Court Handles the Death Penalty”