Bring back the guillotine? A death-penalty opponent touts its merits 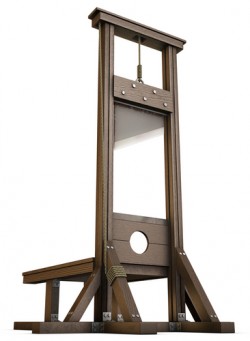 As states grapple with shortages of legal injection drugs, a death-penalty opponent is suggesting a solution: Bring back the guillotine.

The guillotine is quick and possibly less painful than lethal injection, according to the Slate essay. Doctors need not administer it, avoiding violations of the Hippocratic Oath. And the dead inmate’s body could more easily be harvested for organs.

The doctor who created the three-drug cocktail used in lethal injections, Jay Chapman, told CNN in 2007 that perhaps the protocol should be re-examined, given concerns about whether it promotes a slow and painful death, the essay notes. He suggested another alternative. “The simplest thing I know of is the guillotine,” Chapman said. “And I’m not at all opposed to bringing it back. The person’s head is cut off and that’s the end of it.”

The Slate essay sees another benefit to the guillotine. “Capital punishment is always a barbaric practice,” the article says. “If we’re going to continue to allow it in the United States, maybe it makes sense to be confronted by how gruesome it really is.”