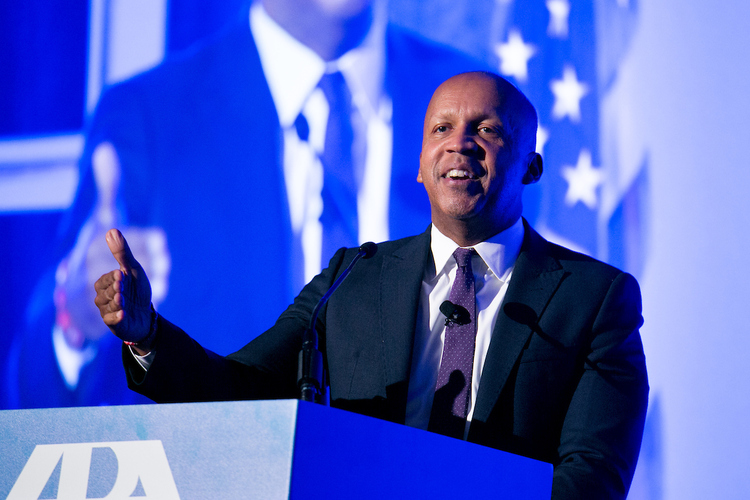 Bryan Stevenson, founder and executive director of the Equal Justice Initiative, urged his fellow attorneys to deepen their commitment to justice, be willing to get uncomfortable and never lose hope.

During an impassioned speech before the American Bar Association General Assembly at the ABA Annual Meeting in Chicago on Saturday night, Stevenson offered ways to address the injustices he has spent a career trying to remedy.

“There is an urgent need for us to keep doing what we’re doing—but to actually do more,” he said. “We’ve got to find new ways to create justice, to open doors that have been closed for too long, to create opportunities for people who feel marginalized and excluded.”

Stevenson’s remarks came after ABA President Hilarie Bass presented him with the ABA Medal, the association’s highest honor. The ABA Medal recognizes exceptionally distinguished service by a lawyer or lawyers to the cause of American jurisprudence.

Stevenson said the privilege of practicing law and having an education allows lawyers to make choices in how they use that privilege. “We have an opportunity to do things that matter,” he said. “There can’t be enough lawyers who are helping those without counsel. Our commitment, literally, has to be to get closer to those who are suffering.”

Stevenson said his experiences getting to know his clients, many of whom were on death row, strengthened his compassion and commitment to seeking justice for them.

Lawyers can also help change the narratives that have led to injustice, from the labeling of young offenders as “superpredators” to categorizing drug users and people with addictions as criminals, rather than looking at addiction as a public health issue.

“We must change the narratives that are out there,” he said. “There are narratives out there that undermine our commitment to the rule of law. I believe fear and anger are the essential ingredients to injustice.”

Stevenson—who recently opened the National Memorial for Peace and Justice in Montgomery, Alabama, which honors black people lynched in the South—said the narrative of race in this country also must change. “I think we’re burdened by a history of racial inequality that is so difficult and so painful that it’s actually creating a kind of smog,” he said.

And lawyers must also keep the faith. “I believe that for lawyers in particular, we’ve got to stay hopeful,” he said. “Hopelessness is the enemy of justice. It takes courage to be hopeful.”

Stevenson told a moving story of trying to save an intellectually disabled man from execution, and hearing that the Supreme Court declined to stay his execution. He spoke to the man on the phone less than an hour before the scheduled execution. The condemned man cried and told Stevenson that he loved him for trying to save his life.

Stevenson did some soul searching after that crushing moment, pondering why he continued to do this work. He thought about how broken the man was, and how his career was spent representing people broken by poverty, addiction and racial injustice. “I realized … I do what I do because I’m broken too,” Stevenson said. “It’s hard to see it without being injured by it in some way. You get cracked, and shattered and pushed and overwhelmed.”

But being broken deepens compassion, and Stevenson feels closer to his clients because of it.

“I believe each of us is more than the worst thing we’ve ever done.”