Busy Morning at the High Court; Big Decisions, Farewells and Scrutiny of the Court's Latest Nominee 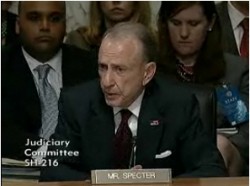 The confirmation hearings for Elena Kagan’s nomination to the U.S. Supreme Court have begun on a remarkable day in the nation’s capital.

The hearing began barely more than an hour after the high court finished the work of its 2009-10 term, issuing important decisions on the Second Amendment right to bear arms, the First Amendment rights of student religious groups, patent rights, and executive power over independent federal agencies.

But it’s also a day when the court and the Senate Judiciary Committee recognized the deaths of people of note.

Chief Justice John G. Roberts Jr. began today’s session of the court by taking note of the death Sunday of Martin D. Ginsburg, the husband of Justice Ruth Bader Ginsburg. Martin Ginsburg, 78, died of complications from metastatic cancer. With Justice Ginsburg taking her seat this morning, the chief justice lauded her husband for his “sharp wit and engaging charm.”

The court then spent an hour delivering opinions, including summaries of dissents read from the bench by Justice John Paul Stevens and two by Justice Stephen G. Breyer. Then, shortly after 11 a.m. Eastern time, it was time to bid adieu to Justice Stevens after his nearly 35 years on the court.

Roberts read a letter signed by all members of the court, as well as retired Justices Sandra Day O’Connor and David H. Souter, which noted that Stevens has served one-sixth of the existence of the Supreme Court since it first convened in 1790.

“Your decision to retire saddens each of us in distinct ways,” Roberts said. “We will miss your wisdom, your perceptive insights and vast life experience, your unaffected decency and resolute commitment to justice.”

The chief justice then gave Justice Stevens an opportunity “for rebuttal,” as he put it, to laughs in the courtroom. Stevens read a short letter of thanks on behalf of himself and his wife, Maryan, which he prefaced by noting that it was addressed “Dear Colleagues,” while when Stevens joined the court in 1975 would have typically been addressed “Dear Brethren” to the then all-male court.

The court then adjourned until the first Monday in October, and it was time to scramble down the block to the Hart Senate office building, where Senate Judiciary Committee Chairman Patrick Leahy started promptly at 12:31 p.m.

After recognizing the death overnight of Sen. Robert C. Byrd, D-W.Va., at age 92, Sen. Leahy began his opening statement about the Kagan nomination.

Leahy stressed themes such as that Kagan “earned her place at the top of the legal profession” and that her legal qualifications are “unassailable.”

Sen. Jeff Sessions of Alabama, the ranking Republican on the committee, noted in his opening statement that Kagan “certainly has numerous talents and good qualities, but there are serious concerns about this nomination.”

Sessions hit notes that he and other Republicans have stressed in recent weeks, such as that Kagan is light on courtroom experience, having never tried a case before a jury and making her first appellate argument only nine months ago (in the Supreme Court as solicitor general arguing the campaign finance case.)

Sessions also noted Kagan’s experience in the Clinton White House doing “policy work,” as he put it, and her handling of military recruiters as dean of Harvard Law School.

“No individual—nominated by a president of either party—should be confirmed as a judge if he or she does not understand that the judge’s role is to fairly settle disputes of law, and not to set policy for the nation,” Sen. Sessions said.

The opening statements from the other members of the committee are continuing at a rapid pace, and the day is expected to finish with Kagan’s own statement.