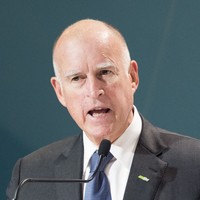 Since taking office for his third term in January 2011—his first two terms ran from 1975-83, and his fourth began last year—Brown has appointed 309 judges and 81 of them have worked as public defenders, for 26 percent of the total. It is difficult to compare the percentages with those of other governors because state databases don’t track them in such fashion, KQED reports. But observers say Brown’s appointments mark a significant shift away from earlier governors who largely appointed prosecutors.

“We never had a tradition that said to be a judge you had to be a district attorney,” Brown said. “The judges are supposed to be independent. You want judges that have a commercial background, you want judges that have a prosecutorial background, city attorneys, or county counsel, or small practice, plaintiffs’ practice—you want a diversity, instead of kind of a one note fits all.”

He says that “using and manipulating the fear of crime has allowed one segment of our society,” law enforcement, to be overrepresented on the bench.

Brown inherited a federal court order to cut the state’s prison population and has been behind measures to alleviate the problem. Last month, he announced he will push for a ballot initiative that would make it easier for nonviolent offenders to get early release, largely through incentivizing good behavior while in prison.

The president of the California Public Defenders Association, Michael Ogul, says the life-work diversity will balance the judicial system.

But the president of the pro-law enforcement Criminal Justice Legal Foundation pushes back, saying that the during his first two terms, in the mid-1970s and early 1980s, Brown appointed “an incredible amount of activist” judges who were “very favorable to defendants.” It’s too soon to tell about the ones Brown appointed in recent years.

Not that Brown has ignored prosecutors. About 14 percent of his appointments in recent years have been former district attorneys, for a total of 31 percent with background as prosecutors, KQED reports.