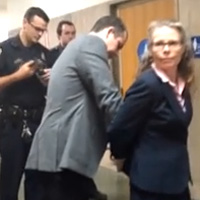 A resisting case will not be pursued against a veteran assistant San Francisco public defender who was handcuffed in a court hallway last month and taken away after she objected to a plainclothes police plan to photograph her client there. The incident was filmed by fellow attorneys in a now-viral video that has been viewed over 1.3 million times on YouTube,

The city’s police chief said Wednesday that the district attorney’s office had decided not to prosecute the misdemeanor charge of resisting or delaying arrest against Jami Tillotson, reports the San Francisco Chronicle. As the video shows, she refused a police request to step aside, explaining that she was advising her client, and was then handcuffed in the hallway of the San Francisco Hall of Justice.

Meanwhile, the local chapter of the American Civil Liberties Union said at a Wednesday city police commission meeting that department policy concerning how such incidents are handled should be reviewed.

“The spectacle of two African American young men being targeted by the police within a public space inside a courthouse without their lawyer present, and then having that lawyer,” after she arrived in the hallway, “handcuffed and carted away for trying to advise them, raises the specter that other young men of color are being similarly targeted for intrusive investigations and photographing in the community where attorneys are not on the scene,” wrote legal director Alan Schlosser of the ACLU of Northern California in a letter to the commission.

Police commissioners declined to comment at Wednesday’s meeting, saying that Tillotson’s arrest is under investigation by the office of citizen complaints. Police chief Greg Suhr apologized for “any distress” to Tillotson as a result of being handcuffed and held for about an hour but said the officer who photographed her client “had reasonable suspicion to take the pictures.”

ABAJournal.com: “See the video: PD is handcuffed in court hall for refusing to step aside for police photo of clients”