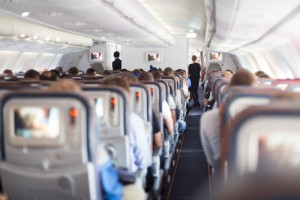 A federal appeals court has ordered the Federal Aviation Administration to conduct a more thorough review of a group’s claim that shrinking airline seats create safety problems for passengers who have to leave the plane in an emergency.

“This is the Case of the Incredible Shrinking Airline Seat,” the U.S. Court of Appeals for the D.C. Circuit wrote in a July 28 opinion (PDF) covered by Reuters. “As many have no doubt noticed, aircraft seats and the spacing between them have been getting smaller and smaller, while American passengers have been growing in size.”

That observation had spurred the Flyers Rights Group and its president to petition the FAA to make rules for seat size and spacing. The FAA denied the petition, pointing to “(at best) off-point studies and undisclosed tests using unknown parameters,” Judge Patricia Millett wrote in the opinion. “That type of vaporous record will not do.”

The FAA cited outdated studies that don’t appear to control for seat dimension, and don’t address how increased passenger size interacts with seat size to affect emergency egress, Millett said. The government cited more recent studies testing evacuations with current seat size, but claimed they were “proprietary” and couldn’t be included in the public record. Nor did the government agree to provide the tests under seal.

“That is not how judicial review works,” Millett said. “We cannot affirm the sufficiency of what we cannot see.”

The government’s position “blinks reality,” Millett said. “As a matter of basic physics, at some point seat and passenger dimensions would become so squeezed as to impede the ability of passengers to extricate themselves from their seats and get over to an aisle. The question is not whether seat dimensions matter, but when.”

The appeals court remanded the case for the FAA “to adequately address the petition” but said there was no need at this point to order the government to engage in rulemaking.