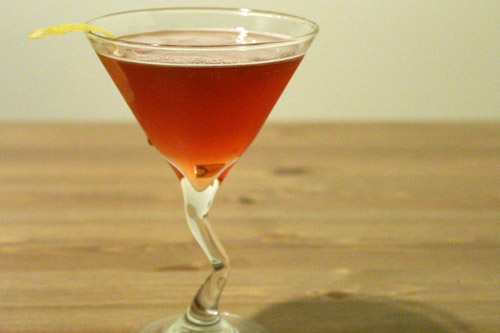 Eighty years ago today, on Dec. 5, 1933, the Eighteenth Amendment was officially repealed by the ratification of the 21st Amendment. It once again became legal to produce, transport, and sell alcohol in the United States, ending the massively unpopular 13-year experiment in Prohibition which had led to a big boom in organized crime and deaths from drinking bootleg spirits and other alcohol substitutes. The 18th Amendment today remains the only constitutional amendment to be repealed.

To celebrate this legal milestone, we put the “bar” into bar association and created our own original, legally themed cocktail. We call this concoction the “mens rea”—the guilty mind. It has strong citrus notes, which serve to disguise its strength, provided by the backbone of cognac. The sweetness of the amaretto and Cointreau balances the assertive bitterness of the Campari, making for a friendly, yet complex cocktail.

Shake vigorously in a cocktail shaker with ice. In a martini glass, rub the peel of a lemon around the rim to coat with the lemon’s oils. Strain into the glass and garnish with lemon peel.

If you have suggestions for other legally themed cocktails, please include those in the comments below.