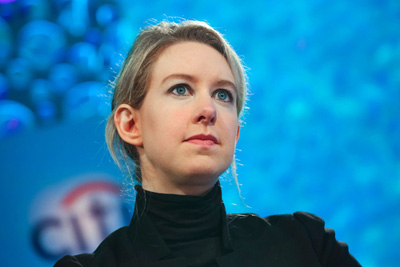 The founder and CEO of blood testing company Theranos has agreed to settle civil fraud charges filed Wednesday by the Securities and Exchange Commission.

The SEC says Theranos CEO Elizabeth Holmes raised more than $700 million from investors “through an elaborate, years-long fraud” in which she exaggerated or made false statements about the company’s technology and finances. The Wall Street Journal, Bloomberg News, the Washington Post and USA Today are among the publications covering the news; the SEC complaint is here.

Holmes had led investors to believe Theranos’ key product, a portable blood analyzer, could conduct a full range of tests from drops of blood. The technology was said to be faster, cheaper and more accurate than existing technology.

In reality, the SEC said, the blood analyzer was used to complete only a small number of tests offered to patients, and most tests were conducted on analyzers manufactured by others.

The SEC acted after the Journal reported on problems with the testing technology.

Holmes did not admit or deny wrongdoing. The settlement calls for Holmes to pay a $500,000 penalty, give up majority voting control of the company and be banned from holding an officer or director position in a public company for 10 years.

The SEC also accused former Theranos president Ramesh “Sunny” Balwani of misleading investors. He has not agreed to a settlement.