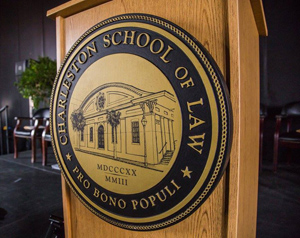 Photo from the Charleston School of Law Facebook page.

Charleston School of Law in South Carolina has launched a new admissions program that allows students to begin classes in the spring and graduate in 2½ years.

The new program, one of only a few such programs in the country, distinguishes the school as an “innovator” in legal education, Dean Andy Abrams said in a press release Thursday.

Fifteen students are enrolled in the inaugural program, which began classes this week, the school says. The students will follow a curriculum that potentially allows them to be on pace to graduate with the current first-year class, which graduates in May 2018. This would involve taking summer classes, since the same course requirements would be expected. Tuition for both programs would be about the same.

Andy Brack, a spokesman for the school, told the ABA Journal that the program would be especially beneficial for students who graduated from undergraduate programs at the end of fall semesters, or at other off-cycle times. Brack says he sees the new program as entrepreneurial in nature, allowing Charleston School of Law to provide more alternatives for students, and for students to better time their entry into the job market.

Charleston School of Law President J. Edward “Ed” Bell III said the size of the inaugural class has more than met his expectations. He also said it proves that the school, which has been mired in a an ownership controversy for the past two years, is moving quickly in a “bold new direction.” The school was given full ABA accreditation in 2011.

A proposed sale of the school to the for-profit company Infilaw fell through in 2014. Bell, a Charleston lawyer who invested in the school last fall and has since become its president and managing partner, has said he plans to turn the school into a non-profit.

The school, citing money woes and declining enrollment, briefly considered closing last year, but eventually decided to remain open. It is one of three law schools on a list of schools being monitored by federal officials to ensure that student aid is being used in a way that is accountable to students and taxpayers.