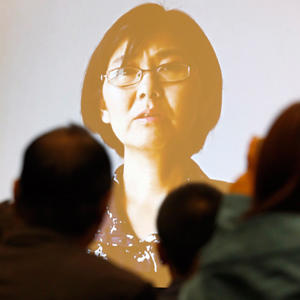 A photo of Chinese lawyer Wang Yu is seen on a screen during the first ABA International Human Rights Award ceremony at the ABA Annual Meeting in San Francisco. Photo by Tony Avelar.

ABA leaders and members of China’s community of dissidents-in-exile living in the United States packed a meeting room at the Moscone West convention center in San Francisco on Saturday morning for the presentation of the ABA’s inaugural International Human Rights Award.

But one key figure was conspicuously absent from the event: award recipient Wang Yu, a Chinese lawyer who represents numerous political, religious and academic dissidents, and members of other underserved groups seeking justice through the Chinese legal system.

Since Monday, Wang’s status in China has been uncertain. She was first detained by Chinese authorities in July 2015, and has been held in detention for the past 13 months and kept out of contact with her family amid a general crackdown on dissidents that has seen hundreds of people detained. Wang’s husband, human rights attorney Bao Longjun, was also arrested and detained. The New York Times reports that he is still in detention, and that their teenage son, Bao Zhuoxuan, has been living under surveillance in northern China with his grandmother.

But on Monday, the Associated Press and other media reported that Wang was released on bail, in conjunction with videotaped “confessions” that were posted on the websites of two Hong Kong media outlets. In the confessions, she renounced her legal work with the Fengrui law firm and said “foreign forces” were using her law firm to undermine and discredit the Chinese government. On Thursday, Zhou Shifeng, leader of the Fengrui firm, was sentenced to seven years in prison.

According to the AP, Wang also denounced the ABA award in her alleged video confession. In the video, she said, “Regarding this award, my attitude is to not recognize it, identify with it or accept it. This award is just another way for them to use me to attack and smear the Chinese government.” (The Washington Post on Monday noted that she could have been referring to a European human rights award she won in June.) 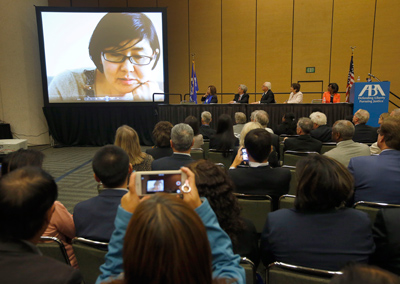 At the ceremony, ABA leaders and members gathered to honor Wang Yu for her human rights work. Photo by Tony Avelar.

But neither ABA representatives nor the Chinese dissidents who attended this morning’s award presentation during the third day of the association’s 2016 Annual Meeting appeared to be convinced that Wang’s statements in the released video have credibility.

“By every measure, Wang Yu merits this award,” said ABA President Paulette Brown of Morristown, New Jersey, at the presentation program. Brown said it was important that the ABA go ahead with giving the award to Wang, and she noted that ABA officials have not been able to confirm the circumstances of Wang’s release and confession.

“We should all be reminded of the critical role that lawyers play in assuring democracy around the world,” said Brown, who credited Wang for representing some of China’s most “marginalized and vulnerable communities,” particularly women and children. Wang “is symbolic of China’s human rights community,” said Brown.

The ABA does not have confirmation that the confession came from her, an ABA spokesperson said about Wang’s statements, noting that a number of experts have suggested it’s a propaganda ploy by the Chinese government. “We’re continuing to monitor the situation,” said the spokesperson.

The Chinese activists who attended the ceremony also expressed doubts about the statements Wang made earlier this week. “I don’t believe it’s the real mindset of Wang Yu,” said Xia Yeliang, a former economics professor at Peking University, who is now visiting fellow at the Center for Global Liberty and Prosperity of the Cato Institute in Washington, D.C. “Under pressure and threats to her family, she was forced to say these things. I believe in the future she can express her real feelings.”

The award, which recognizes an individual or organization for advancing human rights outside the United States, is co-sponsored by the Center for Human Rights; the Section of Civil Rights and Social Justice; the Section of International Law; the Section of Litigation; and the Rule of Law Initiative. 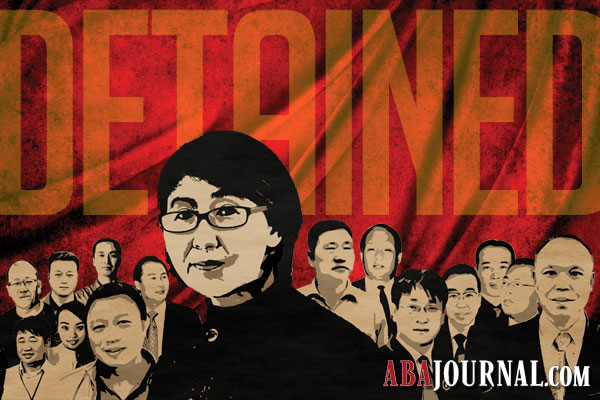