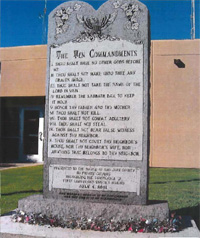 The Denver-based 10th U.S. Circuit Court of Appeals ruled in a suit by two Wiccans. How Appealing links to the decision (PDF).

The 10th Circuit found a constitutional violation, even though private funds were used to pay for the monument, and despite a small disclaimer on the tablet that says any message is from the donors, rather than the city.

A second, freestanding sign also carries a disclaimer saying the lawn has been opened up as a public forum for local citizens to display monuments reflecting the city’s history of law and government. The monument messages do not necessarily reflect the opinions of the city, the freestanding sign says.

The 3,400-pound, 5-foot tall monument was erected on the city hall lawn in July 2011. Monuments depicting the Gettysburg Address and the Bill of Rights were installed in 2012 and 2014.

Permanent monuments are government speech, regardless of who pays for them, the 10th Circuit said. Though the Supreme Court has not detailed the meaning of permanent, “we are confident the Ten Commandments here met the standard.” The city had pointed to a policy that made monument donors reapply every 10 years for the right to keep them, but the 10th Circuit said it made no difference.

“Any monument can be removed with a big enough construction crew,” the court said. “But Bloomfield has no plans to remove the monument and imposes no limit on how many 10-year periods will be permitted.”

The court also said the purpose and context of the installation of the monument “would give an objective observer the impression of official religious endorsement.”

The text of the monument is religious, it is located in front of Bloomfield’s principal government building, and it is visible to nearby onlookers as well as drivers on the highway, the court said. In addition, the city council member who proposed the idea at first raised funds only through churches, and the monument dedication ceremony was “decidedly religious.”

The disclaimers weren’t sufficient to insulate the city, the appeals court said. “Context reveals what the disclaimer’s text attempts to obscure,” the decision said. And the addition of two other monuments was not enough to secularize the religious message of the Ten Commandments monument, according to the court.

“The impermissible taint of endorsement remains,” the court concluded.

Alliance Defending Freedom, which represented the city, said in a statement that it is consulting with its client to consider options for appeal.

The case is Felix v. City of Bloomfield.