Cleveland Man Ticketed for Littering After Giving Money to Panhandler 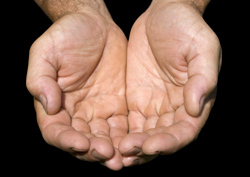 A Cleveland man says he was ticketed for littering after trying to give money to a panhandler in a wheelchair.

John Davis told Fox 8 he was driving on an off ramp earlier this month when he noticed a man in a wheelchair on the side of the road holding up a sign asking for help.

Davis says he reached out his car window to give the man a few dollars, but that one of the dollars fell to the ground. The man picked the dollar up, and Davis went on his way.

Minutes later, Davis says, he was pulled over by a police officer and ticketed for littering from a moving vehicle. The offense was listed as “throw paper out window” and in parenthesis “money to panhandler.” Fox reports that there is a specific city code violation for giving money to panhandlers, but Davis says that the ticket was for the alleged littering.

Davis, who says he believes everybody should help the less fortunate, says he is particularly sympathetic to people in wheelchairs because he has a brother who is paralyzed.

Though he plans to fight the ticket–which could cost up to $500–in court, Davis says he is now wary of trying to help those in need.

“I’d like to do it again, but I’m petrified I’m going to get a ticket,” he said.