Cleveland Solo Takes His Civ Pro Case Before the Justices 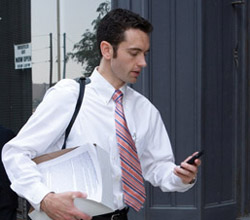 Cleveland lawyer David Eduard Mills was warned that he probably wouldn’t get very far into his oral argument at the U.S. Supreme Court before receiving a question from the bench. On Monday, it was a matter of eight seconds.

“I’m sorry to interrupt so quickly,” Chief Justice John G. Roberts Jr. said, pressing Mills on whether he was conceding a small point in his very first sentence. The lawyer insisted he wasn’t.

Mills was profiled in the November issue of the ABA Journal as “The Long Shot,” a 33-year-old solo federal appellate practitioner who works out of a spare bedroom of his home and whose only paralegal is his mother, Elisabeth.

Mills took up the Supreme Court appeal of Michelle Ortiz, a former Ohio correctional system inmate who was sexually assaulted repeatedly by a guard and put in solitary confinement after reporting the incidents. Ortiz sued the state and two guards on federal civil rights claims, and won a $625,000 jury verdict against the guards.

But the Cincinnati-based 6th U.S. Circuit Court of Appeals reversed the decision last year, holding that the trial judge refused to grant summary judgment to the guards based on a defense of qualified immunity.

The question Mills successfully convinced the high court to take was whether a party—here, the prison guards—may appeal a denial of summary judgment after a full trial on the merits of the case, if the guards did not appeal the order before trial.

It’s the kind of arcane procedural issue that attracts little attention from the press but that the justices seemed to relish.

“Denial of summary judgment is not reviewable on appeal after trial, especially where the decision depends on whether the evidence on the merits of the claim is sufficient to cross the legal line for liability,” Mills told the justices.

Mills faced pointed questioning from several members of the court, with Justice Samuel A. Alito Jr. appearing the most skeptical of his arguments.

“Although the 6th Circuit referred to summary judgment in its opinion, it seems to me the 6th Circuit actually reviewed the evidence at trial and determined that the defendants were entitled to judgment as a matter of law,” Alito said. “So I don’t know why this case actually presents the question on which cert was granted.”

That point was picked up by Benjamin C. Mizer, Ohio’s solicitor general and, it so happens, a University of Michigan Law School classmate of Mills.

“Because it’s demonstrably not true that [the 6th Circuit was] treating the summary judgment order as the final appealable order here, the question presented by Ms. Ortiz is not actually presented by this case,” Mizer told the justices. “I think the clear resolution is to dismiss the case as improvidently granted.”

But that view seemed to gain little traction among the justices, who by the end of the argument appeared to be searching for a way to resolve the circuit conflict with a clear rule, which would likely be a victory for Mills and Ortiz.

“What’s the rule you want us to adopt to answer the question presented?” Justice Sonia Sotomayor asked Mills during his rebuttal argument.

“The answer is that a party may not appeal a denial of summary judgment after trial,” Mills said.

“In no circumstances?” Sotomayor pressed.

“I would say that the clearest rule is to say that in no circumstances,” Mills said.

Mills, as well as Mizer, came across as collected and confident. At one point, Mills displayed humility to a line of questioning posed by Justice Stephen G. Breyer, who was asking him about what decisions and scholarship had to say about a particularly arcane matter of federal civil procedure.

“You’ve looked up the treatises and so forth,” Breyer said. “It seems to me [the issue] must have been thought about before this minute. Not necessarily by you, but by somebody.”

“Yes, indeed,” Mills said. “I think it has been thought about,” he added, noting that most federal circuits had addressed the issue raised by Breyer.

After the argument, Mills gathered with family members, his client, and the two lawyers who volunteered to sit as co-counsel with him in the high court, Christian J. Grostic, with whom Mills clerked on the 6th Circuit; and Andrew S. Pollis, a professor at Case Western Reserve University School of Law, where Mills is an adjunct professor.

Mills kept a cautious outlook. “There were very thoughtful questions posed to both sides,” he said.

Ortiz, who contacted Mills to take her Supreme Court appeal only hours before a deadline to request an extension of time, said she was pleased with the performance.

“I think he did an excellent job,” she said on the Supreme Court plaza. “No matter how the case turns out, I feel I helped myself get closure on this case.”