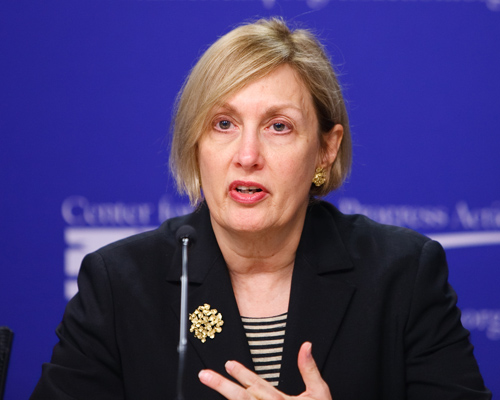 Photo of Jamie Gorelick courtesy of the Center for American Progress Action Fund.

The lawyer considered to be a front-runner for attorney general in a Hillary Clinton administration is now representing President Trump’s daughter and son-in-law, to the consternation of some Democrats.

Jamie Gorelick has represented Ivanka Trump and her husband, Jared Kushner, to help them determine compliance with federal ethics laws, Politico reports. During the campaign, Gorelick had helped raise money for Hillary Clinton and, when Bill Clinton was president, she was deputy attorney general.

Gorelick, a WilmerHale partner, tells Politico she is surprised by the vitriol from some Democrats who object to her decision.

“I don’t pass my clients through a 100 percent values-alignment litmus test,” she said. “If people want to come to me and get good, principled, ethical advice, and they want to follow it, then I will take them on as a client.”

Gorelick believes her representation of clients from the opposite party is in keeping with a longtime Washington tradition, and she wants to encourage good people to serve.

Norm Eisen, former White House ethics czar for President Obama, disagrees with Gorelick’s opinions on the laws as they apply to Kushner and Ivanka Trump. But he thinks her involvement is a good thing.

“It’s consistent with our profession to represent your clients zealously,” he told Politico, “but at the same time, push them as far as they will go in the direction of what is right.”