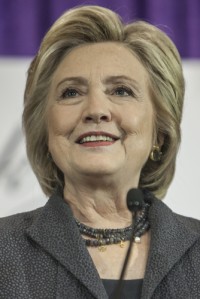 Hillary Clinton says in answers to lawsuit interrogatories that she can’t recall being warned about using a private email server to conduct State Department business.

Responding to 25 questions in the suit by the conservative nonprofit group Judicial Watch, Clinton used some variation of “I don’t recall” at least 20 or 21 times, according to counts by Politico and the Associated Press. A press release is here.

Clinton also said she doesn’t remember being warned about possible hacking, and she doesn’t recall any reason other than convenience for using the private server. Her answers generally track Clinton’s public statements, according to Politico.

Clinton and her husband have been frequent targets of Judicial Watch, the New York Times reports. “The organization filed its first lawsuit against the Clintons shortly after its formation in 1994,” the article says, “and it pretty much never stopped.”

The strategy of Judicial Watch, the Times says, is to “carpet-bomb the federal courts with Freedom of Information lawsuits.” It is currently the plaintiff in more than 20 suits involving Clinton.

Critics say the group is using the Freedom of Information Act for political purposes rather than public good. Supporters say the group’s suits have led to release of Clinton emails that have informed the public debate.