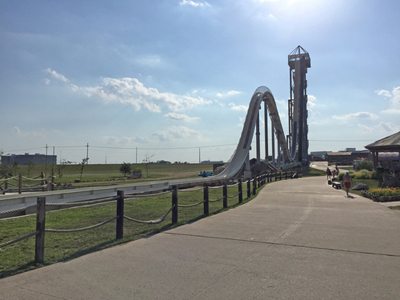 The Verruckt waterslide is seen in this 2016 photo at Schlitterbahn Waterpark in Kansas City, Kansas./Greg D. (Shutterstock.com.)

The co-owner of a Kansas waterpark has been arrested in Texas and charged with second-degree murder in connection with the death of a 10-year-old boy who was decapitated on what authorities say was a poorly designed waterslide.

Jeffrey Henry, the co-owner of Schlitterbahn Waterparks and Resorts, was arrested on Monday, report the New York Times, the Kansas City Star and the Associated Press in stories here and here.

Initial reports said Henry was charged with aggravated battery and aggravated child endangerment. But the Kansas attorney general’s office said Tuesday that Henry had been indicted along with ride designer John Schooley on a charge of reckless second-degree murder. A Texas judge ordered Henry to be held without bond.

Henry was arrested in connection with the 2016 death of Caleb Schwab, who was decapitated when his raft went airborne and collided with overhead hoops and netting. Two adults were also injured.

A prior indictment released on Friday charged the waterpark and its former operations director, Tyler Austin Miles, with 20 criminal counts, including involuntary manslaughter, aggravated child endangerment and aggravated battery.

According Friday’s indictment, Henry dropped out of high school and has no technical or engineering credentials, yet he controls many decisions regarding Schlitterbahn construction and design projects. The park had rushed to complete the water slide, the world’s tallest, to impress producers of a Travel Channel show called Xtreme Waterparks, the indictment said.The park “obviously ignored” a consultant’s warning that the ride was unsafe, according to the indictment.

The indictment said Schwab’s death was thought to be an isolated incident until waterpark whistleblowers came forward and said Schlitterbahn had covered up similar incidents.

The waterpark said in a statement that it has demonstrated “the highest dedication to safety” and it would contest the charges.

Schwab’s family received a settlement of nearly $20 million from Schlitterbahn and other companies.