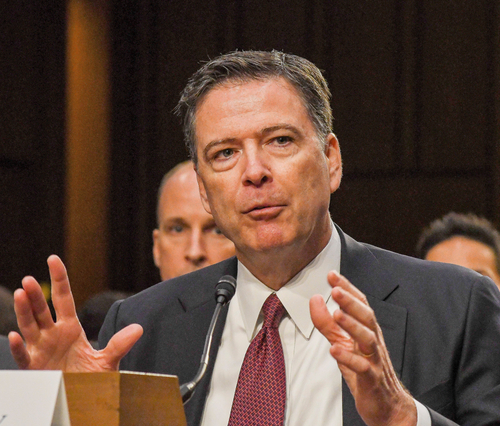 A memoir by fired FBI director James Comey draws on his experience as a mob prosecutor in making parallels between crime family loyalty oaths and the expectations of President Donald Trump.

Comey’s new book is A Higher Loyalty, Truth Lies and Leadership. The New York Times has a review and a news report, while the Washington Post also has an article.

In the book Comey claims Trump’s leadership “is transactional, ego driven and about personal loyalty.” Comey has said Trump asked for his loyalty in meetings in January and February last year, and Comey makes some associations as he describes what he learned about mob families.

In the mob, Comey writes, there was a “silent circle of assent. The boss in complete control. The loyalty oaths. The us-versus-them worldview. The lying about all things, large and small, in service to some code of loyalty that put the organization above morality and above the truth.”

News coverage of the book details Trump’s alleged response to unverified allegations in a Russia dossier that Russia had recorded Trump watching prostitutes urinate on themselves in a Moscow hotel room in 2013 as a way of soiling the bed used by former President Barack Obama. Trump wanted the allegations investigated so they could be proven untrue, Comey said in the book. Trump also asserted he was a “germaphobe” and there was no way he would allow prostitutes to urinate around him, Comey said.

The book is scheduled for release next week.

Trump apparently responded to coverage of Comey’s book on Friday in a tweet calling Comey an “untruthful slime ball” and a “proven LEAKER & LIAR,” the New York Times reports. “It was my great honor to fire James Comey!” the president tweeted.

James Comey is a proven LEAKER & LIAR. Virtually everyone in Washington thought he should be fired for the terrible job he did-until he was, in fact, fired. He leaked CLASSIFIED information, for which he should be prosecuted. He lied to Congress under OATH. He is a weak and…..

….untruthful slime ball who was, as time has proven, a terrible Director of the FBI. His handling of the Crooked Hillary Clinton case, and the events surrounding it, will go down as one of the worst “botch jobs” of history. It was my great honor to fire James Comey!