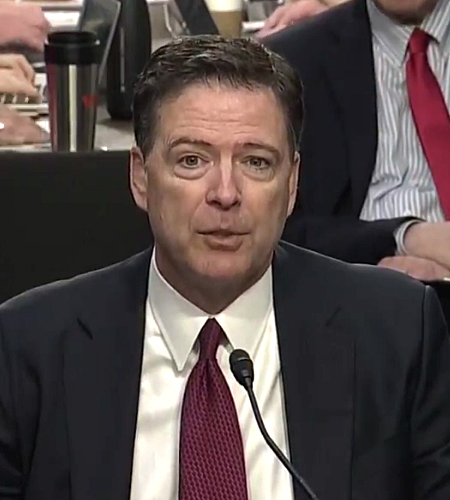 Corrected: Former FBI director James Comey told the Senate Intelligence Committee on Thursday that he took steps to get his version of a meeting with the president to the news media, believing that doing so might trigger the appointment of a special counsel.

Comey said he wrote memos summarizing his interactions with President Donald Trump because he feared Trump would lie about the nature of the meetings.

In those meetings, Trump asked Comey for loyalty and said he hoped Comey could let go of the investigation into former national security adviser Michael Flynn’s contacts with Russia, Comey said in prepared testimony for the committee.

After his firing, Comey leaked one of those memos to a Columbia law professor and asked him to share its contents with a reporter, Comey said. Daniel Richman confirmed he was the professor in an email to the Wall Street Journal.

Comey leaked the memo after his May 9 firing. The Washington Post says Comey’s revelation about his desire for a special counsel was “a remarkable admission showing the degree of concern he had about both Russian interference with U.S. politics, and his doubts about the Justice Department’s ability to probe such activity.”

Comey implied in his testimony that any tapes of his conversations with Trump would verify his version of events. “I’ve seen the tweet about tapes. Lordy, I hope there are tapes,” he said.

Comey was referring to a May 12 tweet by Trump that said, “James Comey better hope that there are no ‘tapes’ of our conversations before he starts leaking to the press!” Trump tweeted after a New York Times report that Trump had asked Comey to pledge his loyalty to the president.

After the president tweeted, Comey said, he decided he needed to get the information out in the public square. He asked the law professor to share contents of the memo with a reporter “because I thought that might prompt the appointment of a special counsel,” Comey said, according to a “rushed transcript” by the FiveThirtyEight blog.

In his initial statement to the committee, Comey defended the FBI and his leadership of the bureau. Comey said he was confused and concerned about shifting explanations given for his firing.

The Trump administration, he said, chose to defame him and the FBI by asserting the organization was in disarray and the workforce had lost confidence in its leader. “Those were lies, plain and simple,” Comey said.

“The FBI is honest, the FBI is strong. And the FBI is and always will be independent,” Comey said.

Comey said President Donald Trump gave another explanation for his firing when he told a reporter he was thinking of the “Russia thing” at the time; Comey said he took the president at his word. “It’s my judgment that I was fired because of the Russia investigation,” Comey testified. The Associated Press emphasized Comey’s assertion in its coverage.

“I was fired in some way to change, or the endeavor was to change, the way the Russia investigation was being conducted,” Comey said.

But when asked if Trump had sought to stop his investigation into Russian interference with the election, Comey said, “Not to my understanding, no.”

In his prepared testimony, Comey said Trump told him at a private dinner in January that wanted loyalty from him. “I need loyalty, I expect loyalty,” Trump reportedly said.

Comey also told the committee about a request by former Attorney General Loretta Lynch to refer to the Clinton email probe as a “matter” rather than an investigation. Asked if he would have been fired if Hillary Clinton had been president, Comey replied simply, “I don’t know.”

He appeared somewhat emotional when asked why the allegations about Russian attempts to influence the election are a big deal. The Russians “tried to shape the way we think, we vote, we act,” Comey said.

“They’re coming after America,” Comey said of the Russians. “We remain that shining city on the hill and they don’t like it.”

Trump’s personal lawyer, Marc Kasowitz, issued a statement saying Comey made clear that the president is not under investigation as part of any probe into Russian interference in the election. He also said Comey made clear that the president never sought to impede the investigation and in fact told Comey it would be good to find out if some satellite associates of his had done something wrong.

Kasowitz also said that Comey had made unauthorized disclosures of privileged information to the press, and the New York Times had been quoting from Comey’s memos even before Trump’s tweet. “We will leave it [to] the appropriate authorities to determine whether [these] leaks should be investigated along with all those others being investigated,” Kasowitz said.

Updated to include Kasowitz’s statement at 1:44 p.m. Last updated at 2:56 p.m. to note coverage that was in fact from Associated Press. First paragraph corrected on June 9 to report that Comey said he took steps to to get his version of a meeting with the president to the news media. Date of Comey’s firing corrected on June 9.