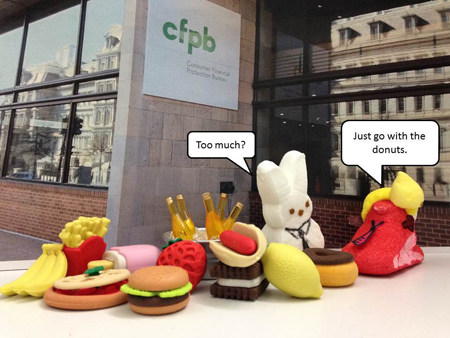 For the second straight year, the winning diorama was submitted by the Harley-Davidson Financial Services Legal/Compliance Department.

The winner of our 10th annual and final Peeps in Law diorama contest is Mulbunny's First Day at the CFPB with 37.29 percent of the vote.

Second place in this year’s contest went to Evicting a Very Strange Peep by McCue Law Office of Hampden, Maine, with 28.84 percent of the vote. In third place went to Government Shutdown at Mount Peepmore by Michelle Randall of Sioux Falls, South Dakota.

The ABA Journal thanks everyone who submitted entries over the last decade and to all the voters who helped choose the winners.

Find out who gets to hang on to bragging rights in the 2018 Peeps in Law: Stranger Peeps diorama contest!

The ABA Journal thanks everyone who has submitted their entries over the years as well as those who cast votes for their favorites!