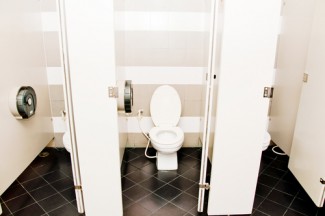 About a year ago, the Brooklyn Supreme Court became the first state courthouse in New York City to designate a gender-neutral restroom, Justice Lawrence Knipel says.

Since then, the sign designating the historic facilities has repeatedly been swiped, the New York Post reports.

Seeking to flush out the culprit or at least “put the fear of God in people,” Knipel, who oversees the courthouse, put up some strongly worded signs about three months ago.

“WARNING!!! To the person removing the non-gender specific bathroom sign. If you continue doing so, you will be caught,” they warn. “If you are a lawyer, you may be disbarred. If you are an employee, you may be fired.”

The suspect or suspects remain at large. But since the signs went up the pace of wrongdoing has slowed, the newspaper reports.

Police sources told the Post that the case of the bathroom bandit could potentially result in petit larceny or criminal mischief charges, if a suspect is identified. Admittedly, Knipel lacks the power to disbar any attorney who may be responsible for swiping a sign, but he could make a disciplinary complaint.

“It’s conceivable that the attorney disciplinary committee could disbar over this type of activity. They could certainly do something lesser,’’ Knipel told the Post. “I only wanted to put a strong statement out.”