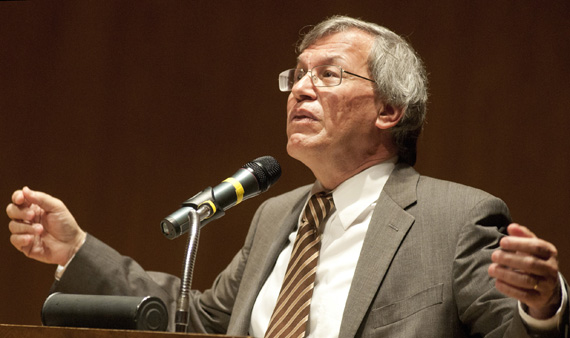 The growing financial crisis facing state court systems has coincided with the economic doldrums that have existed in the United States since at least 2008. But at least one expert in law and government warned today that politics may be having just as much impact on legislative funding decisions for the courts as a lack of funds.

The nagging economic slowdown—there are fears that the United States is slipping into its second recession in five years—has been bad enough for the courts, said Erwin Chemerinsky, who is dean at the University of California at Irvine School of Law. But in looking at why state legislatures in many states are cutting funding for the courts, he says: “I think it will be a mistake if the discussion stops there. Another factor is politics, and the judiciary isn’t a particularly powerful advocacy group.”

Chemerinsky was the opening keynote speaker for a symposium on court funding being held this weekend at the University of Kentucky College of Law in Lexington in honor of 1971 graduate Wm. T. (Bill) Robinson III, who became ABA president in August. Robinson is the member in charge of the Florence, Ky., office of Frost Brown Todd. The symposium is being co-sponsored by the Kentucky Law Journal, the ABA, the National Center for State Courts and LexisNexis.

While it’s difficult for members of the judiciary to engage directly in lobbying efforts with legislators, Chemerinsky said, the organized bar, which he described as the natural advocacy group to speak on behalf of the courts, still is struggling to convince legislators and the public that the viability of the courts is crucial to both protecting individual rights and bolstering the interests of the business community. That task is not getting any easier, he said, as the numbers of lawyers holding legislative seats around the country continues to drop.

Another factor, Chemerinsky said, is that the growing use of private justice mechanisms like mediation is allowing corporations and wealthy individuals to avoid using the courts to deal with legal matters.

But perhaps most important is the apparent “lack of support for the political will to fund what we need in government,” Chemerinsky said. “We have to take on the larger social issue of how we convince people the government isn’t an evil, that the government provides for them.”

Chemerinsky’s speech set the tone for much of the discussion that followed during a series of panels. In one of those panels, for instance, Lisa A. Rickard, who is president of the Institute for Legal Reform at the U.S. Chamber of Commerce said the chamber endorses recommendations for improving court funding that were adopted in August by the ABA House of Delegates. The recommendations were developed by the association’s Task Force on Preservation of the Justice System. “These cuts could not come at a more inopportune time,” she said, as more people are turning to the courts seeking remedies for problems relating to the economy.

But at the same time, she said, the business community would like to see some of its concerns about the courts addressed, such as discovery delays and third-party financing of litigation. She noted that a study (PDF) commissioned by the institute indicates that small businesses in the United States face some $152 billion in tort costs, including class actions, just in 2011. Concerns about such issues can make it harder to build effective coalitions to speak on behalf of the courts, she said. “So far, we’re still looking at ways to create dialogue on building a broader coalition,” she said.