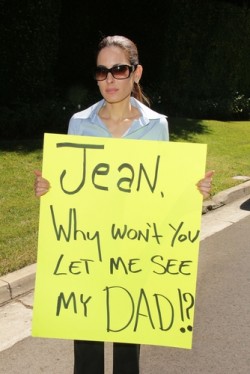 A Washington state judge on Friday partially upheld a California judge’s ruling that put a daughter of legendary “Top 40” disc jockey Casey Kasem in charge of his medical care as a temporary conservator.

Kitsap County Superior Court Judge Jennifer Forbes allowed Kerri Kasem to visit her 82-year-old father for up to an hour daily, and also ruled that she may have a doctor of her choosing evaluate her father, reports the Associated Press.

However, the judge scheduled another hearing Friday to consider whether to give her control of Casey Kasem’s medical care. His wife, Jean Kasem, objects to the role of Kerri Kasem, and says she, not her stepdaughter, should be making medical decisions for her husband.

Known for his radio shows counting down the “Top 40” in popular music every week, Kasem is suffering from a form of dementia, according to NBC News. His children from a former marriage say they are concerned because he has been kept from seeing them recently.