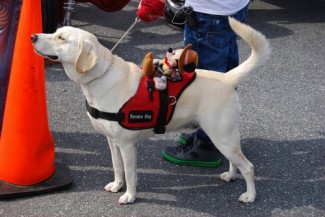 The Iowa Supreme Court has dismissed a suit that claimed Drake University’s law school discriminated on the basis of disability by barring from class a dog being trained by a law student as a service animal.

The former law student who sued, Nicole Shumate, worked as a service-dog trainer, but she was not disabled, the Iowa Supreme Court says in its opinion (PDF) issued on Friday. She sued under an Iowa law governing the rights of people with disabilities.

The decision said the Iowa statute allows disability dog trainers to bring the animals into public buildings, but the legislature didn’t intend to allow suits by trainers to enforce those access rights. The Legal Profession Blog and the Des Moines Register noted the decision.

Shumate founded Iowa’s first service-dog-training nonprofit, Paws & Effect, after enrolling in the law school in June 2006. She graduated in December 2009. Shumate told the Des Moines Register that despite losing the case, she is glad the suit raised awareness. “It’s gotten a lot of coverage in the media,” she said. “This lawsuit, for me, was never about a financial recovery. I feel like my objective was met.”

The law school’s motion to dismiss had denied that it excluded Shumate from class or any Drake-sponsored event because of the service dog, but deemed the facts as true for purposes of its motion.