Courts struggle to sort out meanings of emoticons and emoji 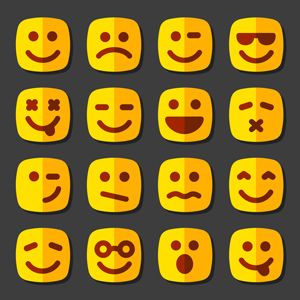 Keyboard-crafted emoticons and digital emoji are becoming an issue in court cases, where judges are asked to decide whether the symbols affect the meaning of texts and emails.

Emoticons such as “:-P” denoting a stuck-out tongue and “;)” denoting a wink are particularly tricky for courts, Slate reports in a story noted by Above the Law. Slate summarizes several cases, including these:

• A University of Michigan law student sued a female classmate who reported he was stalking and harassing her, along with the school and police for launching an investigation. No charges were ever brought. He argued his texts to a friend saying he wanted to make the classmate “feel crappy” and experience depression shouldn’t have been taken seriously, in part because he used an emoticon indicating a stuck-out tongue. A federal judge in Michigan found the emoticon didn’t materially alter the meaning of the text.

• In August, a Delaware judge interpreted a winking emoticon used in a text in which a man boasted about surprising a woman by purchasing a plane ticket so he could be seated next to her on a flight to Paris. The man said the wink showed he was joking; the judge said the emoticon showed he was amused by the opportunity to harass the woman.

• A Michigan appeals court ruled last year that a post to an online message board about corruption wasn’t defamatory because it included a tongue-out emoji, indicating the post was a joke.

• Lawyers for Anthony Elonis, convicted under a federal threats law for his Facebook posts, persuaded the U.S. Supreme Court that prosecutors had to prove intent in his prosecution. Part of Elonis’ defense was that his use of the stuck-out tongue emoticon showed he didn’t actually intend to harm his wife.

• A Texas man accused of a sexual assault in 2011 argued the victim had consented to sex, partly through texts using a winking face emoticon. The judge disagreed.