Crash survivor sues publisher, claims he was exploited by book's false claim of visit to heaven 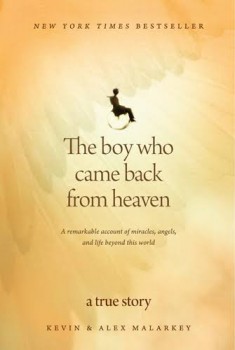 Updated: An Ohio man who survived a severe car crash as a boy in 2004 has filed a lawsuit claiming that he was financially exploited and his privacy invaded by a book’s false claim that he visited heaven.

The plaintiff, William Alexander “Alex” Malarkey, filed the suit on Monday against Tyndale House Publishers, which listed him as a co-author of the 2010 book The Boy Who Came Back From Heaven. Malarkey claims Tyndale House apparently made millions of dollars from the story, but he never received a penny. The Washington Post and Courthouse News Service covered the lawsuit, filed in Illinois court in DuPage County.

Malarkey, who turned 20 on Wednesday, was paralyzed in the accident. Alex Malarkey relies on Social Security and support from his mother for income. They are “on the verge of being homeless,” the suit says.

Malarkey was 6 at the time of the accident, and in a coma for two months. Malarkey told others that he had gone to heaven where he met Jesus and Satan, a claim he recanted in January 2015, according to the Post. Tyndale House announced it was taking the book out of print the same month.

Malarkey’s suit says the accident was caused by the negligence of his father. The suit says Kevin Malarkey concocted the story of the heaven visit and sold it to Tyndale House, one of the largest Christian publishers in the country. “The truth is that Alex does not remember anything from the time when he was in a coma,” the suit says.

Tyndale never asked Alex Malarkey if the information in the book was true or if he was the co-author, according to the suit. Nor did it get his consent to publish. The book sold more than 1 million copies. Tyndale sold rights to a TV production company and made its own DVD documentary, the suit says.

The suit says identifying Alex as a co-author of the book violates Illinois’ Right of Publicity Act, and he is entitled to profits from the unauthorized use of his name, along with punitive damages. Malarkey also seeks an injunction requiring Tyndale House to disassociate his name from the book, which lists his father as a co-author.

The suit also alleges the publisher violated Alex Malarkey’s right to privacy, cast him in a false light, intruded on his seclusion, defamed him, violated Illinois law barring deceptive trade practices, and financially exploited him in violation of an Illinois law barring the exploitation of people with disabilities.

“Alex’s testimony for Christ will be perpetually marred by the need to tell every person who asks that what they read about him in the book is a string of lies,” the suit says.

Tyndale House released this statement: “This is a terribly unfortunate situation which deeply saddens all of us at Tyndale. Despite the claims in Alex Malarkey’s lawsuit, Tyndale House paid all royalties that were due under the terms of our contract on his book, The Boy Who Came Back from Heaven. Tyndale took the book out of print in 2015 when Alex said that he had fabricated the entire story. Any books still available from online vendors are from third party sellers.”

Updated at 11:10 a.m. to remove reference to Malarkey’s father being deceased; updated at 12:45 p.m. with statement from publisher.