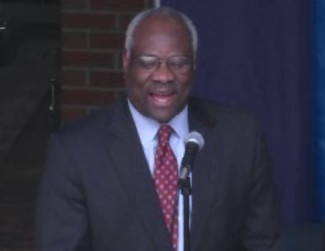 Click here to watch video of Thomas’ speech at the University
of Florida.

The individual, not his or her school or degree, is what is important, Thomas told a group of students at the University of Florida, according to the Associated Press and the Gainesville Sun.

“Isn’t that the antithesis of what this country is supposed to be about? Isn’t that the bias that we fought about on racial terms, or on terms of sex, or on terms of religion, etc.?” Thomas is quoted saying. “My new bias, which I now embrace, is that I don’t eliminate the Ivies in hiring, but I intentionally prefer kids from regular backgrounds and regular students.”

Thomas told students that clerks have told him they were considered “Third Tier Trash” by bloggers looking at rankings. But Thomas urged students not to buy into the notion. And he was critical of those who saddle themselves with debt by falling prey to “stargazing” by only considering the highest ranked and highest priced schools.

The Yale Law School grad also offered advice on surviving law school and he urged them to remain hopeful despite the tough job market, the Gainesville Sun notes.

Hat Tips: How Appealing and Above the Law’s Morning Docket

Updated Sept. 26 to include video of Thomas’ speech.