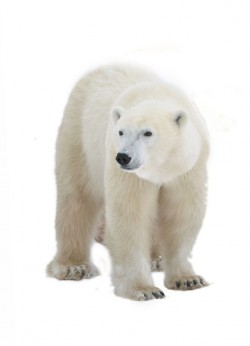 A Maine lawyer on vacation in a remote area of Canada was attacked and mauled by a polar bear while camping with others last week in a national park.

Now in intensive care after being airlifted to a hospital in Montreal, Matthew Dyer is in critical but stable condition. His wife says she expects him eventually to make a full recovery and tell some riveting vacation stories, according to an initial Maine Today Media Inc. report and the a subsequent Maine Today story.

Dyer, who works at Pine Tree Legal Assistance in Lewiston and is highly thought of as a civil-rights advocate, is a lover of the outdoors and was on a group hiking trip in Torngat Mountains National Park in northern Labrador. Polar bears are common in the area, and one broke through an electrified fence at about 1:30 a.m. on Wednesday and attacked Dyer as he was in his tent. Other campers eventually drove the animal away with signal flares.

“I think we should all wait until Matthew is able to speak about his own firsthand experience, and I am sure he will,” said his wife, Jeanne Wells, in a written statement Sunday. “Trust me, there will be bear stories. For now, I’d like everyone to know that he is in good hands. His injuries are serious, but he’s very stable, he’s very strong and in great health, and I have no doubt that he will make a full recovery. It’s going to take time.”

She also thanked rescuers and Montreal General Hospital for the “incredible care” he has received, saying that it saved his life.

The mauling is the worst polar bear-related incident ever at the park, Peter Deering told a reporter for Maine Today Media. He serves as a Parks Canada manager of resource conservation, and said a physician who was a member of the hiking group also was instrumental in Dyer’s survival, stabilizing him and, apparently, flying with him in the helicopter out.

“Polar bears are plentiful across the whole park landscape, more plentiful along the coast certainly, but you can encounter them anywhere on that landscape,” he said. “Visitors regularly encounter polar bears whenever they are in Torngat Mountains, but we’ve never had an attack like this since the park was established in 2005.”

Everyone who enters the park gets a safety briefing, and officials strongly recommend, but do not require, that the six to 10 groups who hike there annually hire an armed Inuit bear guard from the local government to keep a lookout for polar bears, Maine Today reports.

Dyer’s group did not do so and carried no firearms, instead relying on a portable electric fence. Deering said a park service investigation is ongoing to determine if the fence malfunctioned or the polar bear simply ignored the electric jolt and kept going. Polar bears are reportedly suffering a decrease in habitat, believed to be tied to global warming, that has reduced the polar ice cap and created stress on the species.

“Polar bears, as opposed to many other species of bear, they are true carnivores,” said Deering. “They are predators. They hunt. They hunt things to eat. What precipitates a polar bear attack is you showing up on the landscape and them wanting something to eat.”

As multiple polar bears prowled the area after the attack on Dyer, the group tried repeatedly to reach the Royal Canadian Mounted Police on a satellite phone, eventually getting through at about 6:30 a.m. A helicopter happened to be a in base camp for the park and arrived within an hour. It took 10 hours for a boat to arrive for the other campers.

Previous:
Should inmate with prince of God delusion be executed? ABA seeks clarification of standard

Next:
Was 'beautiful ladies' comment in Roe v. Wade the worst courtroom humor of all time?