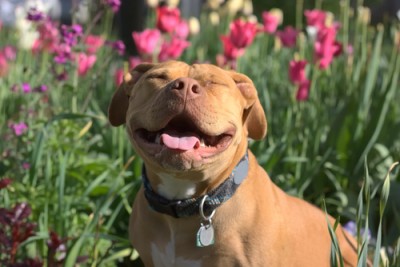 The Iowa Court of Appeals has granted a reprieve to Pinky the dog in a 3-2 decision finding Des Moines’ dangerous animal ordinance was unconstitutionally vague as applied to the mixed-breed canine.

The city is considering whether to appeal the April 4 decision, report the Des Moines Register and the Associated Press. How Appealing links to the decision.

The statute failed because it was unclear whether Pinky satisfied the definition of a “dangerous animal” that could not be kept in Des Moines, the court ruled.

Pinky had lived peacefully until March 2016 when a friend visiting Pinky’s owner let the dog into the yard unsupervised. The neighbor’s cat, Rebel, ended up in Pinky’s mouth, but Pinky dropped the cat when her owner ran outside. Rebel survived the episode, but needed three dozen staples for her wounds.

Pinky was impounded and the city’s humane officer declared Pinky a dangerous animal under the city ordinance. The owner appealed and sold his interest in Pinky to Dianna Helmers, the owner of an animal rescue center who continued the appeal. She has offered to house Pinky at her shelter, but the city is holding the dog at the Animal Rescue League of Iowa.

The Des Moines ordinance bans the keeping of “dangerous animals” and defines the term. The portion applied to Pinky bans any animal “that has exhibited vicious propensities in present or past conduct, including such that the animal … has bitten another animal or human that causes a fracture, muscle tear, disfiguring lacerations or injury requiring corrective or cosmetic surgery.” (The full definition is at page 5 of the opinion.)

Writing for the majority, Judge Mary Tabor said the city ordinance left too much discretion to city officials to determine when an animal was dangerous.

“It is difficult to imagine how any Des Moines pet owner would know whether an altercation between their pet and another animal would spur the humane officer to declare their pet dangerous,” Tabor wrote. “An outdoor cat that snares an unlucky bird and breaks its wing could be declared a dangerous animal under [the relevant section of the ordinance]. But would the humane officer pursue such a case? If instead of Rebel, an aggressive opossum had been waiting for Pinky in the backyard and Pinky’s defensive bite caused the wild animal a muscle tear, would the humane officer have decided Pinky exhibited vicious propensities’? The ordinance does not delineate clear boundaries between what conduct by an animal is tolerated within the city limits of Des Moines and what marks an animal as having ‘vicious propensities.’ ”

A concurring judge, Richard Doyle, said Helmers had offered to remove Pinky from Des Moines, but the city did not accept her offer.

“Although I have no dog in the fight, I feel compelled to ask: Why can’t this dispute be settled?” he asked.