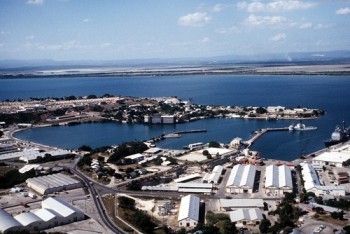 A federal appeals court has ordered the U.S. government to submit classified information about possible attorney-client eavesdropping at Guantanamo Bay.

The appeals court acted in a case filed by two lawyers who resigned from representing the accused mastermind of the 2000 bombing of the USS Cole after finding a microphone in their meeting rooms. Last Thursday’s order, issued by the U.S. Court of Appeals for the District of Columbia Circuit, is here. The Miami Herald has coverage.

Prosecutors had said the microphone was installed in the room for interrogations and was never turned on during attorney-client meetings.

The order asked the government to submit a description of intrusions on lawyers’ communications with their client, lawyers and other legal personnel, as well as intrusions on the lawyers’ legal work product.

The lawyers who had represented Abd al-Rahim al-Nashiri are Rosa Eliades and Mary Spears. They had asked the appeals court to allow them to participate in a Pentagon appellate review of their right to resign.

The judge presiding in the military commissions case, Air Force Col. Vance Spath, had ordered Baker to reinstate the lawyers and found him in contempt when he refused. Baker’s sentence was 21 days’ confinement to his quarters.

Seventeen U.S sailors were killed in the bombing.