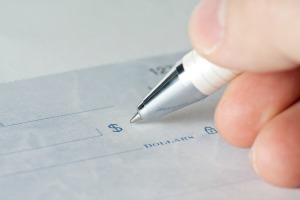 Pen and check photo by Shutterstock.

More than 300 district attorney’s offices across the United States are partnering with debt collectors that use prosecutors’ letterhead to warn bad check writers of possible jail time.

Debt collection companies allowed to use DA letterhead may return the favor, the New York Times reports. “The companies try to collect not only the unpaid check,” the story says, “but also high fees from debtors for a class on budgeting and financial responsibility, some of which goes back to the district attorneys’ offices.”

The official-looking letters are sent without prosecutors’ review to possibly 1 million people a year, consumer lawyers estimate. DA’s office in Los Angeles, Baltimore and Detroit are among those partnering with debt collectors; the biggest players are CorrectiveSolutions of California and BounceBack of Missouri.

BounceBack vice president Gale Krieg told the Times he has turned down prosecutors who won’t agree to have copies of checks sent to their offices for possible review. “Whether they exert oversight isn’t something that we can control,” he said.

The newspaper reviewed five CorrectiveSolutions contracts with DAs and found that merchants can send bad checks directly to the debt collection companies after a bad check writer hasn’t responded to a request for payment. A pending class action lawsuit in San Francisco federal court challenges the collection procedure as “an elaborate artifice” to scare people to pay up.