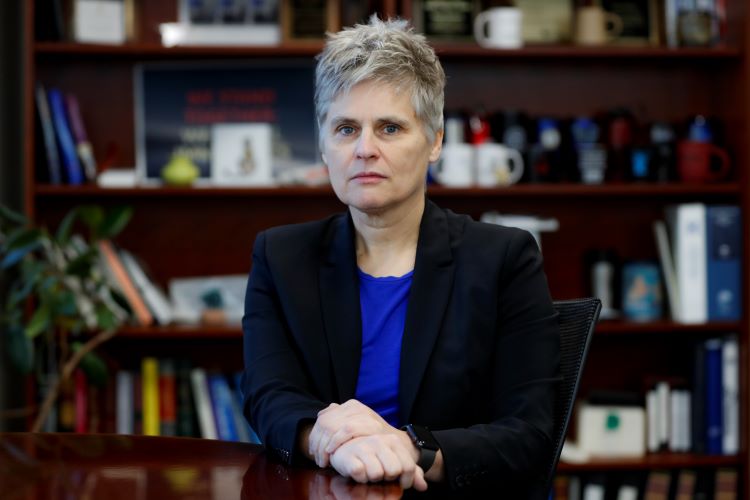 Hennepin County Attorney Mary Moriarty in October 2019. Moriarty has removed an assistant prosecutor from her cases after the assistant prosecutor trying a case involving a St. Paul, Minnesota, man allegedly lied about the content of a note passed to her during trial. Photo by John Minchillo/The Associated Press.

Updated: A St. Paul, Minnesota, man accused of raping a 14-year-old girl is free after an assistant prosecutor trying the case allegedly lied about the content of a note passed to her during trial.

After the alleged lie was revealed, Judge Peter Cahill of Hennepin County, Minnesota, ordered release of the defendant, 35-year-old Marco Tulio Rivera Enamorado, and Hennepin County Attorney Mary Moriarty removed the prosecutor from her cases. Moriarty also dropped the case after Enamorado opposed a mistrial, leaving the prosecution unable to continue because no other prosecutor was familiar enough with the case to step in.

The Minnesota Star Tribune, Fox 9, KARE 11 and MPR News are among the publications covering the story.

Enamorado had been in custody since April 2022.

The defense had argued that the mother had fabricated the rape allegation, so the note could have raised concerns that the mother was coaching the prosecutor, Fox 9 reports. Cahill asked for an explanation.

The note had read “venue?” and was a reminder that the prosecutor had to establish that the alleged crime happened in Hennepin County. But the trial prosecutor, who was identified as Catherine McEnroe, allegedly told the judge that the note was a reminder about how to pronounce the girl’s name.

McEnroe allegedly asked the victim advocate to change the note to back up the pronunciation explanation. The victim advocate complied but later told his superiors what happened. In a new hearing, the prosecutor admitted lying, according to Moriarty.

The note “was not inappropriate in any way,” Moriarty said in a press conference, but the prosecutor “lied to Judge Cahill about its content.”

“Our ethical obligations, one of the most basic ones, is that you may not lie to the court, period,” Moriarty said.

The Minnesota Office of Lawyers Professional Responsibility is investigating McEnroe, according to the Minnesota Star Tribune.

McEnroe’s lawyer, Jeanette Bazis, told the ABA Journal in an email that her client has no comment.