Defendants sport spandex and pajamas in Vegas courthouse, to the exasperation of judges 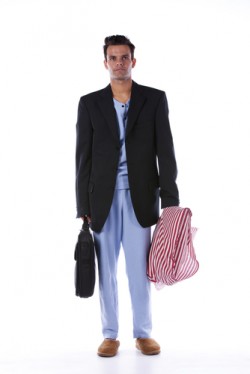 The Clark County courthouse in Las Vegas has a formal dress code, but it’s rarely enforced.

Pajama-clad people come to the court daily, according to a security guard. A woman facing a marijuana charge wore a necklace with a pot pendant. A man accused of domestic violence appeared before a judge wearing a T-shirt with the advice, “Question Authority.” Then there was the defendant who wore a spandex jumpsuit that left nothing to the imagination.

Chief Judge Jennifer Togliatti told the newspaper that she didn’t kick the spandex defendant out of the courtroom because it was clear the jumpsuit was the finest article of clothing he owned. But she did send home a defendant in June who wore a pink polo, cargo shorts and flip-flops. She informed the man that the courthouse wasn’t Walmart, and she rescheduled his case for a later date. Togliatti said the dress was too casual considering the circumstances of the man’s case.

Even the lawyers are appearing more casual. Attorneys who don’t wear ties learn they have a choice when they appear before Judge Conrad Hafen of Las Vegas Township. He tells lawyers they can have their case heard last or moved to a different day; or they can wear a tie out of a collection he purchased from thrift stores. A couple are children’s clip-on ties. Others are funky ties from the 1960s and 70s.