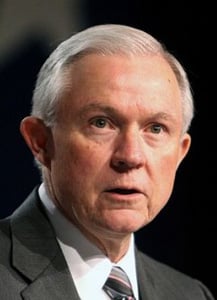 Sessions made the announcement Tuesday morning on behalf of the administration.

“We cannot admit everyone who wants to come here. It’s just that simple.” he said.

In prepared remarks, Sessions–a former Republican senator from Alabama with a restrictive record on immigration–argued that DACA was unconstitutional because it circumvented Congress. He blamed the program for the 2014 “surge” of unaccompanied minor immigrants, and said he believed it was vulnerable to the same kind of legal challenge that ended its sister program, Deferred Action for Parents of Americans.

“Simply put, if we are to further our goal of strengthening the constitutional order and the rule of law in America, the Department of Justice cannot defend this type of overreach,” he said. “Societies where the rule of law is subject to political whims and personal biases tend to become societies afflicted by corruption, poverty, and human suffering.”

President Donald Trump released a statement on his decision echoing Sessions’ remarks, and outlining how the nearly 800,000 existing DACA recipients will be affected. No new applications will be processed, but all existing work permits will be honored until they expire. Applications in the government’s hands will continue to be processed. This will give recipients six to 24 months, Trump said, providing “a window of opportunity for Congress to finally act.”

“As I’ve said before, we will resolve the DACA issue with heart and compassion–but through the lawful Democratic process,” the president’s statement said. “Above all else, we must remember that young Americans have dreams too.”

No DACA holders will be affected before March 5, 2018, acting Homeland Security Secretary Elaine Duke said in a statement. NPR reported that Immigration and Customs Enforcement said that its priorities will not change, and it doesn’t plan to target DACA holders with expiring permits.

“Today’s announced suspension of the DACA program without a ready legislative solution threatens the future of thousands of deserving people to pursue their dreams, and places them in danger of deportation. It also threatens our country’s access to a wealth of human potential,” she said.

DACA was not originally created by Congress, but by former President Barack Obama, who acted after Congress made a failed attempt to pass immigration reform legislation. The program is aimed at young people who were brought to the United States without papers when they were children. Beneficiaries had to be under the age of 31 as of June 15, 2012; under the age of 16 when they arrived in the U.S.; continually residing in the U.S.; in school, graduates or honorably discharged from military service; and without a serious criminal record. They received two-year work permits, which could be renewed, but did not have a path to legal status or any ability to legalize their families through the program.

Obama issued a statement Tuesday afternoon, saying the decision to rescind DACA “was contrary to our spirit, and to common sense.”

“We all want safe, secure borders and a dynamic economy, and people of goodwill can have legitimate disagreements about how to fix our immigration system so that everybody plays by the rules,” Obama wrote. “But that’s not what the action that the White House took today is about.” Politico reported on Obama’s reaction.

The announcement comes on the same day as a deadline set by a letter (PDF) from a group of state attorneys general and one Republican governor, threatening to sue if the president didn’t end DACA by Sept. 5. The program is unpopular with Trump’s base, and Politico said Sunday that many Republicans believe DACA is unconstitutional because it was enacted by executive order.

Some leaders in Congress have said they are interested in pursuing a legislative solution to the fate of those who have benefitted from DACA. Senators Dick Durbin (D-Ill.) and Lindsay Graham (R-S.C.) have recently put forth a revised DREAM Act that might address the issue, and congressional Democrats condemned the cancellation of DACA and called for bipartisan legislation. According to CBS, House Speaker Paul Ryan (R-Wisc.), told radio station WCLO of Janesville, Wisconsin, on Friday that while he didn’t think Trump should end DACA, he believes “this is something that Congress has to fix.” Republican Senators Orrin Hatch of Utah and Jeff Flake of Arizona have echoed that sentiment on Twitter.

But other congressional Republicans have signaled that they’re unwilling to pass such legislation, at least without strings attached. Immigration hardliner Rep. Steve King, R-Iowa, said Sunday on Twitter that legislation would be “amnesty” and that the delay is “Republican suicide.” Sen. Tom Cotton of Arkansas, another Republican hardliner, said he might insist on tying help for DACA recipients to his RAISE (Reforming American Immigration for Strong Employment) Act, which would cut immigration levels in half by ending many family reunification visas.

The decision faces widespread opposition outside of Congress, including from business leaders and mayors of at least 60 American cities. Rallies in support of DACA were expected nationwide on Tuesday. Among those speaking out is Cesar Vargas, the first undocumented attorney admitted in the state of New York. (The ABA House of Delegates last month passed a resolution supporting bar admission for otherwise qualified young lawyers without legal status.)

Updated at 10:35 a.m. to include statement from Hilarie Bass; Updated at 11 a.m. to include prepared remarks from the Attorney General; Clarified 13th paragraph at 12:13 p.m.; updated at 2:26 p.m. with comments from former President Obama.